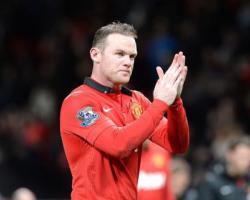 United have not lost four games on the spin in the Premier League era - indeed not since the days of Dave Sexton in 1981 has that happened - and Moyes will be crossing his fingers that striker Wayne Rooney has recovered from injury to help the efforts to avoid that unwanted record.

Swansea triumphed over Moyes' men in the FA Cup last weekend, four days after a Premier League setback at home to Tottenham, and a first-leg loss at Sunderland on Tuesday made it three 2-1 defeats in a row.

Moyes' predecessor Sir Alex Ferguson endured some tricky times during his 27 years at the club but never a four-match losing streak.

And Rooney has urged the club's fans not to desert the club or Moyes in their hour of need.

"The fans have been great here, especially now when we are not in the best of form and we have lost the last few games.

"We need them to support us through this time. We will get stronger and we will get better.

"The fans are vital in being patient with us and letting us try to get there. I am sure we will do."

The recent run has seen pressure being heaped on Moyes - even though before the Spurs match United had won six in a row - to the extent that he could be facing a Football Association charge after launching blasts against match officials.

United are in seventh place, 11 points behind leaders Arsenal and in danger of missing out on Champions League qualification, and goalkeeper David de Gea has revealed the players are putting in extra practice after training to try turn their season around.

He told manutd.com: "We frequently stay after training to practice crossing and finishing.

"We do it especially when there are no matches in the following days and I think the extra training helps me and the other players to improve."

De Gea has teamed up with Mexican striker Javier Hernandez to try to improve each other.

"He is one of the most professional players I have known over the course of my career. He is truly a great player and a good friend."