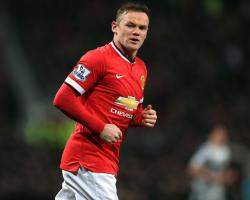 He said: "We have an FA Cup quarter-final against Arsenal on Monday and that is massive for us

"We haven't been to a final for a few years, we want to try to win that game and we are looking forward to that

"Of course, I think it is a massive trophy

It is a trophy that, growing up as a youngster, I used to love watching and I was fortunate enough to see Everton lift the FA Cup in 1995 when I was nine years old

It is something which I would love to do and hopefully it can be this year."

United were 2-0 winners over Arsenal in 2011, the last FA Cup meeting between the sides since the 2005 final in Cardiff's Millennium Stadium, when the match finished 0-0 but the Gunners won after a penalty shoot-out.

Rooney scored in that shoot-out, as did Robin van Persie - for Arsenal

Van Persie and Juan Mata are the only members of the United squad to have FA Cup winners' medals, but both came with other clubs

Rooney, who has nine major honours with United, was also on the losing side in 2007 when Didier Drogba's goal in extra-time earned Chelsea a 1-0 triumph at the new Wembley Stadium

Manchester United boss Louis Van Gaal said: "It is a game, 11 v 11 on a high level

Arsenal and Manchester United are placed third and fourth

It is nearly a final I think."