Rooney happy wherever he plays as United take on Magpies 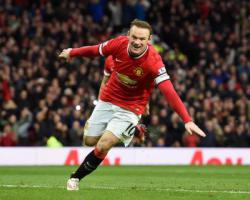 The Red Devils travel to St James' Park hoping to hang on to their place in the top four as they push for a return to the Champions League later this year.

"It's the start of a big three weeks for us," Rooney said

"We have done OK in the big games this year, we could do better, but it is exciting for us with these big games that you want to be involved in.

"We can't look past Wednesday

Newcastle away is always a tough game and we have to try to make sure we come away from there with three points."

The Dutch coach has often opted to use the 29-year-old in midfield, instead of his usual position as a centre-forward.

Rooney played in attack on Saturday and rewarded his manager's decision with both goals in a comfortable 2-0 victory over Sunderland.

The double took Rooney's tally to 11 for the season and moved him one goal ahead of fellow striker Robin van Persie.

The England international, however, says he is happy to play in either role

"Everyone knows I've played midfield for the majority of the season but my record shows that I score goals, so I'm not worried about that at all," said Rooney.

"I was pleased the manager played me up front and am delighted to get the two goals, but the victory was the main thing because after last week it was important we bounced back.

"Where I play is down to the manager

It's his decision where he sees me playing and I respect wherever he wants to play me.

"I've played up front throughout my career so, obviously, I know how to play up front

So I'm ready to play there if and when he wants me to do it."

United will again be without the injured Van Persie for match against Newcastle but Michael Carrick could start after returning from his long-term absence to take a place on the bench on Saturday.

Van Gaal must also decide whether to start Adnan Januzaj after his impressive display when he came on in place of the ineffective Angel Di Maria for the second half against Sunderland.

Massadio Haidara, the defender carried off with a knee problem at the weekend, hopes to be available for selection.

Top scorer Papiss Cisse secured the win over Villa with his 11th goal of the season, and the Senegal international is confident Newcastle can improve their unimpressive home record against United.

They've beaten the Old Trafford club just once in the last 11 visits, and Cisse said: "The Villa win was an important victory, and sets us up nicely for Manchester United.

"It's a game we need to be ready for

Every player in the squad is up for this game and it's just been a matter of getting as much rest as possible since the weekend to be at our best on Wednesday."

Cisse has been playing despite a persistent knee problem

The 29-year-old is hopeful of making the starting line-up in midweek, and caretaker head coach John Carver revealed: We're having to manage Papiss' situation, and we will see what he is like over the next few days."