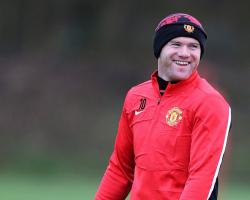 Rooney ended speculation regarding his future last week when he signed a new five-and-a-half-year deal.

The striker is committed to bringing the glory days back to Old Trafford and he hopes this will be the year he wins his second Champions League with United.

"You always want to win it," Rooney told a press conference in Piraeus ahead of United's last-16 first-leg clash with Olympiacos.

"One is never enough, especially at this club.

"You have to keep trying to get into the final when you are at this club.

"The feeling you get when you win it is incredible, so there is no way that you want to stop.

It would be an opportunity to win another trophy, and hopefully we can do that."

Although Olympiacos are one of the weaker teams in the competition, United are still outsiders to reach the final in Lisbon on May 24.

They sit 11 points off fourth place in the Barclays Premier League with 11 games to go, but Rooney still thinks it would be foolish to write off United's chances of winning it this term.

"The year Chelsea won it, they nearly went out of the competition about three times," the United striker said.

We've got quality in the team to go far, so hopefully we can do that."

Rooney may have been at United for 10 years, but his appetite has not diminished at all.

When asked how he would like to be remembered when he calls time on his career, the 28-year-old said: "As a winner

Every player wants to win

I've grown up all my life wanting to win trophies.

That's not just me - that's the whole team."

Olympiacos are unbeaten at the top of the Greek Super League this season, but they have not reached the last 16 of the Champions League since 2010.

With top scorer Javier Saviola out through injury, United are favourites to win the first leg in the Greek capital, but manager David Moyes is not taking the match lightly.

"It will be far from easy," the United boss said.

"Olympiacos came through a difficult group with Benfica, Paris St Germain (and Anderlecht).

"They have a great home record so it will be a difficult night."

Moyes confirmed that injured defenders Phil Jones and Jonny Evans have not travelled with the squad.

Midfielder Nani is also unavailable because of a hamstring injury, but Rafael and Danny Welbeck are back following their respective head and knee problems.