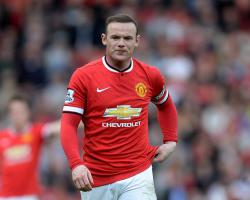 Rooney has enjoyed a good record against Manchester City since he joined United in 2004.

The 29-year-old is the leading United scorer in derby history with 11 goals, the most famous of which came in 2011 when he scored an acrobatic late winner in a 2-1 victory for United at Old Trafford.

He has had to get used to being on the losing side in recent years, though.

United have lost their last four meetings against their biggest rivals, but Rooney is determined to put an end to that sequence this weekend.

"You play for Man United, you want to win these derby games," the United captain told MUTV.

"We want to give United fans something to smile about when they go to work on Monday morning, we want them to be the ones to be able to give out the banter to Manchester City fans at work.

"I think it's a very important game for Manchester United and Manchester City..

for the fans and, for me, it's a massive game of pride."

As well as pride, Rooney knows victory would put United four points clear of City, who dropped to fourth in the table following a 2-1 defeat to Crystal Palace on Monday.

Rooney scored a stunning volley in last week's 3-1 win over Aston Villa and is certain to start against City on Sunday.

Louis van Gaal has the option of welcoming back Robin van Persie after he returned to training following an ankle injury.

But the United boss is more likely to stick with a front three of Rooney, Juan Mata and Ashley Young, who have served him so well in Van Persie's absence.