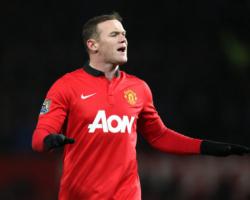 The 28-year-old could seal his Old Trafford future as early as Wednesday or Thursday, the Press Association said.

Media speculation about Rooney's future at the English Premier League giants has swirled since Chelsea attempted to lure him away before the start of the current season.

But despite United's troubles under new manager David Moyes -- which sees them in the unfamiliar position of seventh, 15 points off the pace set by Chelsea -- Rooney is thought to be settled at Old Trafford.

Earlier this month, Rooney insisted he was "focusing on the football" amid a flurry of rumours about negotiations over his contract, which expires at the end of next season.

However, he conceded it is his ambition to beat Bobby Charlton's goal-scoring record for the club

Charlton amassed 249 goals for United and Rooney currently has 208.

"It is a great aim for myself to try and get Sir Bobby's record, both at club and international level," said Rooney, who trails Charlton's record of 49 England goals by 11.

"It is something which I would like to do

If I can do that, I would be really proud, because it has stood for a long time."

Rooney made his professional debut at the age of 16 at Everton under Moyes and has spoken out in defence of the embattled manager, who has struggled in his first season to emulate the success enjoyed by United legend Alex Ferguson

He's done everything he can, but it's the players that have to do better and hopefully we can do that."