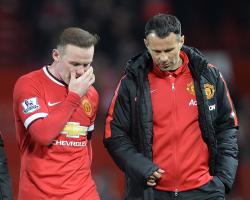 United were knocked out of the competition at the quarter-final stages on Monday night thanks to Arsenal's 2-1 win at Old Trafford.

The club have now gone 11 years without winning the FA Cup and it is the only domestic competition Rooney has not won.

United would have been expected to beat either Bradford or Reading in the next round if they had progressed and given that they were the highest-ranked team left in the competition, they would have been favourites to lift the trophy in May.

"I want to win the cup for and with the team; it's not about me wanting to win the FA Cup," the United captain told MUTV.

"That's why it's so sad for us to get knocked out; we knew we'd have a great opportunity if we'd won on Monday night."

But any hopes of United making a Wembley semi-final were dashed when Danny Welbeck scored against his old club just after the hour and Angel di Maria was given a second yellow card for tugging the back of referee Michael Oliver's shirt.

"Going into half-time having equalised, we felt that we'd create enough chances to win the game, but it wasn't to be."

Welbeck's task for the winner was made much easier because of a mistake by Antonio Valencia in the build-up.

The United right-back sold David de Gea short with a poor backpass, leaving the England striker to tap the ball past the Spanish goalkeeper and roll it into an empty net.

Rooney refused to publicly castigate Valencia and instead turned his attentions to Sunday's Barclays Premier League game against Tottenham.

"Mistakes happen, but it's not nice when you're on the receiving end of one which costs us a goal," Rooney said.

"It's a hard one to take, but we have to dust ourselves down and get ready for Sunday.

"Conceding the second goal the way we did in the second half meant that we were always chasing the game afterwards; they made it difficult for us and defended well."

Oliver dished out seven yellow cards to United on Monday, which means they will be fined ÃÂ£25,000 by the Football Association.