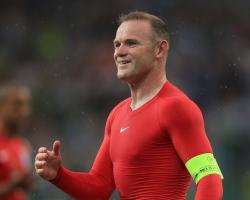 Frank Lampard and Steven Gerrard became the latest Englishmen to move to the United States this summer when they joined New York City and the Los Angeles Galaxy respectively.

Given that he has four years left on his contract at Old Trafford, Rooney is not currently considering where his future lies beyond United.

But when that time comes, a move across the Atlantic will be considered.

"I'm obviously concentrating on Manchester United," said the United captain in an interview with the Seattle Times during United's tour of the States.

"When that time comes, that'll be something I'd think about

(I'll) sit down with my wife and children and decide if it would be right for me."

United play the first of four tour matches against Club America in Seattle and then travel to San Jose, where they face San Jose Earthquakes and Barcelona before tackling Paris St Germain in Chicago.

The fact that United have toured the United States for the last two seasons has enhanced their growing popularity in the country.

Scores of fans - many of them wearing Rooney's name on the back of their shirts - have gathered outside the team hotel in Bellevue, on the outskirts of Seattle, since the squad arrived on Monday to begin their two-and-a-half week tour.

Rooney has been taken aback by the popularity of the club in the country.

"When you're first getting into the first team, it's not something you think about," Rooney said.

"You're just trying to break into the team.

"The older you get, the more you start to think about it, and realize how big football is

Coming to these tours, you get to see it first hand and realize the passion and how much football can bring people together."