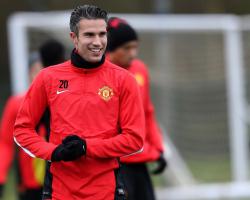 After going through the group stages unbeaten, Manchester United return to Champions League action in the knockout stages on Tuesday when they travel to Olympiacos for the first leg of their last-16 tie.

United are big favourites to progress, but Van Persie knows a big club like Real Madrid, Barcelona or Bayern Munich could be lying in wait for them in the quarter-finals.

"If you play well and are lucky you have a good chance of going far, but even then I think there are eight to 10 teams who could win it this year," the United striker told UEFA.com.

Having sold Kostas Mitroglou to Fulham in January, Olympiacos became heavily reliant on the form of evergreen Javier Saviola, but the Argentinian is out of the first leg due to a thigh injury.

That leaves Olympiacos with just two fit strikers in 21-year-old Michael Olaitan and Nelson Valdez, who moved to the Greek club from Al-Jazira in January.

United have won all four of their games against Olympiacos, but midfielder Ryan Giggs reckons they will still be formidable opponents.

"Once you get to this stage of the competition you know that there are not going to be any easy matches," said Giggs, who was in the United side that beat the Greeks 7-2 on aggregate the last time they met in 2002.

"I remember the home game in 2002 very well - probably because I scored twice.

"This time I think it will be a much more competitive and experienced Olympiacos, they did well in their games in the group stages.

"We know this match is going to be a tough tie, Olympiacos have a strong team."

Giggs remembers the hostile environment that United played in at Olympiacos' temporary home - the Georgios Kamaras Stadium - 12 years ago, even though the crowd was just 13,000-strong.

Around 30,000 are expected on Tuesday, even though part of their current home will be closed due to the racist and unruly behaviour of some of the club's fans during the group stage game against Anderlecht last December.

"The atmosphere in the stadium is going to be electric," Giggs told Olympiacos' website.

"It's always great to play in a stadium with a good atmosphere, we know the Olympiacos fans are going to be cheering their team on, we also have a good set of travelling fans which will make for a great atmosphere."

Should Giggs make it on the pitch, it will be his 150th Champions League appearance.

United are without a few key players for the match in Piraeus, the port suburb of Athens.

Having played Crystal Palace on Saturday evening, David Moyes could make a few changes to his starting XI.

Juan Mata is cup-tied, but midfielder Darren Fletcher was added to the Champions League list in January following his recovery from ulcerative colitis and could therefore feature.