Schmeichel has faith in Moyes 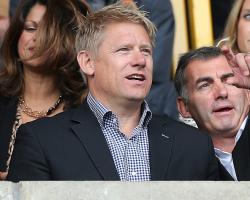 Schmeichel has no doubt the club will ride through their present difficulties.

The champions have lost their last three matches, compounding a tough start to life this season under new manager David Moyes.

The Scot is facing criticism with his team seventh in the Barclays Premier League, out of the FA Cup and trailing after the first leg of their Capital One Cup semi-final - but Schmeichel expects them to come good.

The Dane, a member of the United side that ended a 26-year wait for a league title in 1993, told Press Association Sport: "Any football club, any person, any human being alive goes through adversity.

"The art of living life is to recover from that and respond to any challenges being thrown at you.

"This football club is living proof of that. Whatever is thrown at it, it always bounces back, it always recovers.

"We were in the team that hadn't won the championship for so many years.

"It was really difficult to get over the line for the first time but eventually we got there.

"That had taken 26 years - but the club is in a different place now. The players have not become bad players overnight and I like the manager.

"We have just gone through an unfortunate spell and I am sure we will recover."

Schmeichel was speaking at Old Trafford at a promotional event for the club's new global spirits partner, Aperol.

United have announced a new sponsorship agreement with the Italian brand which will run until the end of the 2016-17 season.

United host Swansea this weekend in a repeat of last week's FA Cup third-round tie, which the Welsh side won 2-1.

Irwin, who won seven titles with United, said: "It is a big game.

"We have obviously been through a tough time in the last month or so but you just feel, as David Moyes says, we need a little bit of luck to go our way and we can get up and running again.

"There is no doubt it has been a tough month and we need to start winning.

"We are obviously in a battle to get as many points as possible.

"It is difficult to put a target on where we can go from here but the main thing is to start winning again and get up and running."