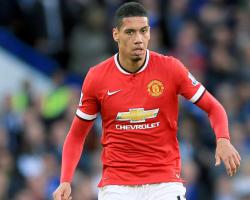 If results had gone their way, United would have started this week second in the Barclays Premier League, but now they are looking over their shoulders after dropping to fourth in the standings.

After winning six on the bounce, United have lost successive games for the first time under Louis van Gaal and they will be just four points ahead of Liverpool if Brendan Rodgers' side win their match in hand versus Hull on Tuesday.

Smalling agreed with Van Gaal's assessment that United lacked aggression from the first whistle and he wants an instant response from his team-mates on Saturday when West Brom come to Old Trafford.

"This is a massive wake-up call for us," the United defender told MUTV.

"Right from the first minute we were off the pace and they had a pressure that we usually have.

"We haven't been the second-best team in games this season, even when we've lost, we've always had that aggression and those tackles but on Sunday we were far from it

I think we'll see a different Manchester United next Saturday against West Brom.

"We'll make sure we learn from this, the fans deserve a lot better."

"We can't afford another game like this one," the Spaniard wrote on his blog.

Mata has challenged his team-mates to secure a Champions League place in the coming weeks by winning all four of their remaining games.

After West Brom's visit this weekend, United head to Crystal Palace and then host Arsenal before rounding off the season at Hull.

"We are in the final stage of the season and we must try to win each of the remaining games," said Mata, who was substituted in the 63rd minute after a poor showing at Goodison Park.

"The goal is to get four wins in the last four games of the Premier League.

"We need to return all the support we get from our fans (at Goodison Park they were brilliant, once again) and we hope to do it this coming Saturday at Old Trafford against West Brom.

"We all want to be in the Champions League next season and, in order to get there, we must go back to the right path with good performances and good results."

United's chances of making the top four would decrease if Wayne Rooney were ruled out for part of the run-in.

The United skipper was replaced by Robin van Persie in the 88th minute after suffering a kick to the knee.

The sight of the 29-year-old hobbling off prompted fears among the United fans, but the medical staff were happy to allow the striker to travel to London on Sunday night for the PFA Awards.

The England skipper did not limp and showed no signs of discomfort during the event at the Grosvenor Hotel, which is positive news for United ahead of their match against the Baggies.

United, meanwhile, will announce the final details of their pre-season tour of the United States on Tuesday.

Details of the tournament's fixtures will be revealed at a press conference on Tuesday at 3pm (BST) in New York.

United took part in five matches on their tour of the US last year, but it is expected they will play fewer times this summer as Van Gaal is worried about his players undertaking the same amount of travelling.

The International Champions Cup takes place from July 11 to August 5 although it is unlikely that United will stay to the end as the Premier League starts on August 8.