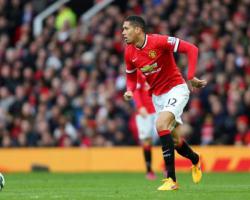 The 25-year-old England international is now committed to the Old Trafford outfit until the summer of 2019.

Smalling, who was signed from Fulham in a ÃÂ£10million deal five years ago, has become a key member of the United side under Louis van Gaal this season.

Manager Van Gaal said: "Chris has improved and developed immensely during the short time that I have been at the club and has become an integral part of the first team squad.

I am delighted he has signed a new contract."

Smalling's previous deal was due to expire at the end of next season.

He recently spoke of his desire to stay at the club long term and his performances in the second half of the season appear to have hastened contract talks.

I am so proud to play for such a great club

We have developed as a team over the course of the season under Louis van Gaal and we are now playing as a complete unit.

"This is a very exciting time to be at Manchester United, we are all determined to get back to where we belong and competing at the highest level."