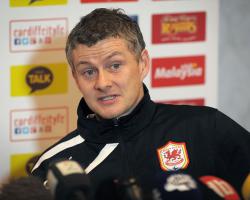 Solskjaer is preparing to take his Bluebirds team to the Etihad Stadium, with Manuel Pellegrini's City side still chasing a potential trophy quadruple.

Solskjaer enjoyed an illustrious 11-year playing career with rivals United, along the way helping the Red Devils to a memorable Premier League, FA Cup and Champions League treble in 1999.

But United have found it difficult to adjust since the departure of Sir Alex Ferguson in the summer, while the investment of Sheikh Mansour's millions has turned City into one of the powerhouses of the English game.

But Solskjaer is not of the opinion City will hold sway over their rivals in the long term.

"The situation in Manchester has not changed permanently," he said. "We are talking about last year's champions in United and they will be around the top of the league come May.

"The progress at City shows what money does to a football club. When you have got money to invest in the structure and the players. They have got owners who want to be successful."

The Bluebirds are a little way off the top 10 at present, having dropped into the relegation zone for the first time this season following last weekend's 2-0 home defeat to West Ham.

A trip to the Etihad appears to hold little prospect of a positive result given City's awesome form on home turf.

Pellegrini's men have won all 10 of their league games there, racking up 38 goals in total.

The Citizens will also bring up a century of goals in all competitions this term should they score against Cardiff.

But Solskjaer expects his players, who beat City 3-2 in Cardiff earlier in the season, to meet the challenge head-on.

"We are not daunted by the challenge, we are relishing it," he said.

"When you go to places like the Etihad and Old Trafford you are going to be tested against some of the best players in the world. But we have got our own standards to adhere to. You need to ride your luck.

"But bigger surprises have happened in the world of football, so you have to go up there with the mindset of having a go and taking something from the game.

"We want to be a top 10 club so you have got to go to these places and take something out of the game.

"They have moulded into a top, top team and you do sit back and admire teams like that sometimes, but we are looking at how we can hurt them.

"They have got a fantastic record at home but it has got to end sometime."