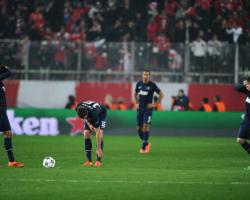 With United dangerously close to an exit from this season's competition and 11 points off the pace in the battle to qualify for next season's tournament via the league, a bleak vision of their immediate future is emerging.

During Alex Ferguson's reign as manager, defeats were invariably shrugged off quickly

Bad results, on the rare occasions that they came in quick succession, were brushed off as "blips", and United would invariably return to winning ways almost immediately.

For Ferguson's successor, David Moyes, however, United seem to lurch from one crisis to another, and the spirit of revolt that used to characterise the club's reaction to adversity is nowhere to be seen.

Moyes continues to insist that the players will "get it right", but faced with the stark reality of the team's current fortunes, his words are beginning to ring hollow.

There was shock when United lost three of their first six games in the Premier League, but if anything, their form now is even worse.

They have lost six of their first 12 games in 2014; a period that has seen them eliminated from both domestic cup competitions, slip to 11 points below the top four, and now witnesses them clinging to life in a tournament that Ferguson prized above all others.

Against Olympiakos on Tuesday, the sense of bewilderment at United's non-performance was exacerbated by the fact that the English champions had travelled to Greece with a more than ample squad.

Centre-backs Jonny Evans and Phil Jones were missing through injury, but the intimidating reputation of the Karaiskakis Stadium made it easy to imagine that Rio Ferdinand and Nemanja Vidic might have been selected instead of them anyway.

Nani, the Portuguese winger, was also absent, and record signing Juan Mata cup-tied, but the midfield of Michael Carrick, Tom Cleverley, Antonio Valencia and Ashley Young was one that had prevailed in matches against both Chelsea and Manchester City last season.

For all United's domestic woes, with a warm-weather break in Dubai and an encouraging 2-0 win at Crystal Palace behind them, the expectation was that they would raise their game to meet the occasion, but instead they produced one of their worst displays of the campaign.

Quite apart from the defensive carelessness that allowed Olympiakos to grow in confidence with each raid into United territory until Alejandro Dominguez's clever flick broke the deadlock in the 38th minute, there was an arresting lack of imagination in attack.

Despite the presence of both Wayne Rooney and Robin van Persie, United failed to test Olympiakos goalkeeper Roberto once, and it was not until Van Persie blazed over with eight minutes remaining that they even managed a meaningful attempt on goal.

Asked to explain the absence of Adnan Januzaj, the livewire 18-year-old who has been the one spark in a season of gloom, Moyes offered an unconvincing explanation that the winger had lost out to Cleverley -- a central midfielder.

"I decided last week I would play Cleverley and it was a time to bring (Januzaj) in and out at the right moments, so I chose not to use him," Moyes said.

While it is not inconceivable that United will turn the tie around in the second leg, their persistent inability to raise their game suggests that the ferocious will to win that characterised the Ferguson era has, somehow, been allowed to seep out of the club.

Commenting on the game for British television, former United captain Roy Keane was characteristically blunt in his assessment of his old side's failings.

"We've been brainwashed that the Premier League is the best in the world - nonsense," the Irishman said on ITV.

"It's the best brand in the world but they have fallen behind, United more than most

They need six or seven players to rebuild the club."

Gradually, the realisation is dawning at United that that rebuilding process may take longer than anyone at the club could have envisaged when Ferguson stepped down last May.