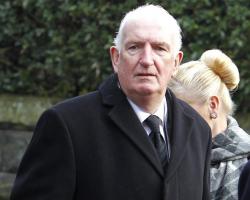 Stepney was involved in one of the most notable moments of Eusebio's career when he made a save from the forward towards the end of the 1968 European Cup final between Manchester United and Benfica that proved pivotal to the outcome.

Eusebio, impressed by Stepney's reactions, stood and applauded the United keeper in an extraordinary show of sportsmanship at Wembley which still resonates to this day.

"It wasn't like I got a clear view of what he did at the time," recalled Stepney.

"There was not long left in the game and I was fully focused on it.

"I made the save and out of the corner of my eye I saw him still standing in front of me. It was only afterwards that I saw what he had done.

"The fact he was standing there clapping before running away is a mark of the man.

"He respected anything we did - and I would like to think it was the same the other way round."

Eusebio was a central figure in English football's greatest moments of the time.

Not only was he the star of that beaten Benfica team that allowed Manchester United to become the first English winners of the European Cup, he was also the star of the Portugal side that lost in the World Cup semi-final two years earlier.

Yet those performances do not do justice to a player who was crowned European Footballer of the Year in 1965 and won the Golden Boot at the 1966 World Cup.

"Eusebio, along with Cristiano Ronaldo probably, would go down as one of the greatest of all players from Portugal," Stepney told Press Association Sport.

"The media attention is obviously not as great now as it was then.

"He first came to people's attention in this country during the 1966 World Cup, when they got to the semi-final.

"I suppose the problem for him was that he didn't enjoy playing against Nobby Stiles too much.

"The fact he lost that semi-final in '66 and also the final against us two years later creates a false picture. In a generation of truly great players, he was one of the very best.

"I was lucky enough to meet him a few times since that 1968 European Cup final and he was the perfect gentleman.

"There are not many around now, but it seemed every club had one at that time. Today is a very sad day."