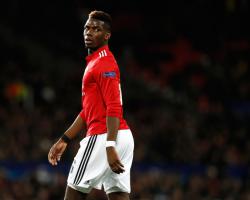 Old Trafford plays host to the most highly-anticipated clash of the season as Jose Mourinho's second-placed side attempt to make a dent on the eight-point cushion built by Pep Guardiola's runaway Premier League leaders this Sunday.

No side has ever enjoyed a better start to a top-flight season and Manchester City will look to take a double-digit lead by ending United's club record-equalling 40-match unbeaten home run.

Pogba knows just how crucial victory is this Sunday and has vowed to help in any way he can, despite the star turn missing the match of the season after his sending off in the 3-1 win at Arsenal.

"I'm very disappointed because I really want to help the team and wanted to be there for this derby because obviously we are playing City and in this moment we need points and we need to win," the Manchester United midfielder said.

"Manchester City against Manchester United has always been a big, big derby

"You know how it is so I won't tell you what is going to happen.

"It's going to be a big atmosphere in the stadium and a big game with a big team and big players so that's the game you want to play.

"Unfortunately I won't play but I will be there to help the team mentally.

"We need to (attack City from the start)

To win those games you need to give everything.

"You need to be there offensively, defensively.

"Kill the game when you have one chance because they are City and they have quality as well in front and they can kill the game at any time."

Pogba's absence is a gut punch given his fine form this season, which continued as CSKA Moscow were overcome 2-1 on Tuesday to secure United top spot in their Champions League group.

Mourinho's men need to utilise the building "positive energy" and the France midfielder has no doubt that the side can flourish in his absence.

"I have complete trust in the team," the 24-year-old said

"Even if I am not there, I will be there watching the game giving positive energy and hopefully we are going to win."

Asked if he can still have a role against City, Pogba added: "Mentally

I need to be there to boost the team and hopefully it will help, yeah."

All help will be welcome against an unbeaten City side whose mental strength has impressed as much as their skill.

"They are first for good reason because they have been doing great at the start of the season," Pogba said.

We need to be as good as they are mentally."

As good as City have been, Guardiola is likely to have breathed a sigh of relief when Pogba was ruled out of the derby.

Sunday is the first of three matches the France midfielder will miss after receiving a straight red card for his challenge on Hector Bellerin in Saturday's 3-1 win at Arsenal.

"Yeah I didn't really speak after the game - I didn't have time - but I think Hector, I know him as well, and I would never give him a tackle like this," he said.

"It looks very bad but the intention wasn't like that

They had the decision, the referee got the red card and that's football."