The end of the road for Louis van Gaal 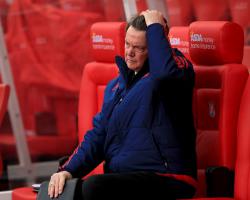 In short they need to score more goals than they concede and with an ironic cheer from supporters greeting the sides first chance, and the penalty to win the match barely more, that is easier said than done.

Sheffield United will be disappointed not to have got something from the match and despite playing virtually everyone behind the ball a club like Manchester United should be able to fashion more chances than they did.

Whilst it is difficult sometimes to feel the magic still exists in the FA Cup when the so-called minnows deploy teams with more household names that the big guns, this accusation cannot be leveled at van Gaal who did not send out the academy, his starting XI was arguably his strongest.

The prospect of missing out again on the Champions League next season will surely not go down well with sponsors and it is difficult to see fans having much sympathy should van Gaal be forced out after that performance in front of the loyal support.

The Star suggests that bosses may go back on assurances that he would be given time to make improvements despite a poor run of form.