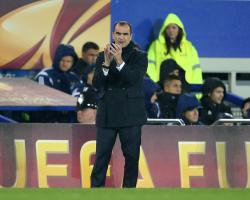 Martinez's men came from behind at Goodison Park to claim the advantage from the last-16 first leg as they once again produced a continental performance in contrast to their domestic displays.

While impressing in European action this term, Everton have struggled in the Barclays Premier League and, ahead of Sunday's home clash against Newcastle, they are just six points above the relegation zone in 14th after registering only one victory from their previous 12 top-flight fixtures.

The home crowd were restless in the opening stages of the Dynamo game, with Martinez's players looking as uncertain as they have done in the league and falling behind in the 14th minute to Oleg Gusev's strike.

But the fans were roaring by the final whistle after Everton bounced back strongly, with Steven Naismith's 39th-minute effort levelling things before Romelu Lukaku converted the winner from the penalty spot with eight minutes to go.

And Martinez said: "I think it has to be a turning point for us.

"The crowd are intelligent and they know that we are a very honest group of players that are trying to play our best football.

"Today you saw the same team with a real anxiety in the first 20 to 25 minutes finding it very difficult to express ourselves.

"But then, when we get that tempo right and that freedom and expression in our play, we are a very, very good team.

"I think it's a moment where we need each other more than ever.

"And now we need to focus on the league and on Sunday get that feeling that we had in the second half.

"We need to be together and help each other to express ourselves.

"Once we get that winning momentum in the league we are all going to get the rewards of seeing an outstanding football team with a lot of youngsters with enormous potential."

Regarding the prospects for his side - the last British team left in the competition - in next week's second leg, the Spaniard added: "We know they (Dynamo) are a very good side, and especially at home.

"But we look forward to going to Kiev.

"It will be a really strong challenge with them having the home advantage, but we have played well in Europe away from home.

"We will have to be at our best

The support will be really important."

Dynamo coach Sergei Rebrov, the former Tottenham and West Ham striker, said of his team's display: "In England, matches are always hard but at first - until the 30th minute - we played very well.

"But then it was very difficult psychologically for us.

"Everton played with a very fast tempo and we couldn't play as fast as them.

"But we know we have the second leg in Kiev and we must play another way.

"We hope to be more aggressive in the home match."