Transfer record to be smashed again 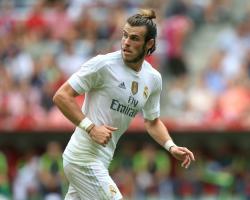 n 72 league appearances it seems the persistent reports linking him away continue to surface every transfer window.

Previously it has been stated that the fans were angry with him, the dressing room couldn't communicate with him, no-one would pass him the ball and now he is devastated at the loss of a manager that has been a rock for the past few months in Rafa Benitez

Despite all of these alleged difficulties it seems that Bale himself has not only put a brave face on things but also suggested he couldn't be happier: "I donÃât feel I need to make a statement to anyone.

"I had a very good relationship with Rafa [Benitez], obviously it was a big disappointment to see him go, but things like this happen in football, youÃâre professional and you get on with it and carry on.

"I'm happy at the moment

Obviously you can never predict what happens in the future, but I'm enjoying my football at the moment so I'll keep going."

The player had of course just scored a hat-trick and despite the persistent attentions (unwanted or otherwise) of Manchester United according to The Times, cited from the Mirror it is difficult to see Bale returning to the Premier League anytime soon even if ÃÂ£90m was waved in front of the noses of Los Blancos

Such a figure would represent a new world record and would confirm Bale as one of the most expensive players in the world who despite consideration is not even considered for the shortlist for the world player of the year gong.

We shall await further rumours with interest but also some measure of scepticism.