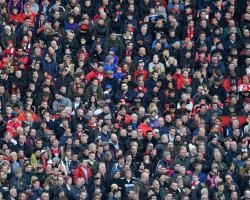 Around 900 supporters are expected to make the 3,000-mile round trip to watch the Group A finale, which Jose Mourinho's men only require a draw in to guarantee progress to the knock-out stages.

The match is being held at the Stadion Chornomorets in Odessa rather than Luhansk due to the political problems in eastern Ukraine.

Those travelling have been warned by United about the threat of attacks, but UEFA has expressed its confidence that those attending will be safe ahead of Thursday's match.

A statement from European football's governing body read: "We are confident that the host club together with the local authorities will take all necessary measures to ensure the safety and security of the players, the match officials and the supporters of the two teams."

Despite UEFA's comments, there were problems in Odessa when Zorya hosted Fenerbahce and Feyenoord in the Europa League this season.

Both matches were marred by violence, reportedly started by fans of local club Chornomorets Odessa, with bats, sticks and axes said to have been used.

The threat of a similar flare-ups were outlined to travelling fans in a letter from United club secretary John Alexander.

"At the previous group stage games in the city there have been attacks on visiting fans with some in the park around the stadium, so we therefore advise you not to walk through this park to the stadium," he said.

"The shuttle buses will again be in operation after the game to take you back to the city centre.

"For your safety and security you are advised not to wear Manchester United colours when in the Ukraine or attract attention to your presence in the city.

"Due to political sensitivity in the region it is not just opposition football fans who may potentially pose a risk to your safety.

"Incidents of serious disorder during the European Championships in France last summer involving violent individuals and groups emanating from Eastern Europe should be remembered when considering your movements and actions, and any potential risk."