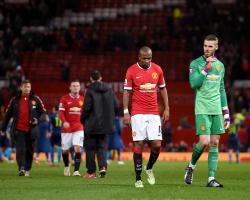 After the meeting with Spurs at Old Trafford, Louis van Gaal's side take on Liverpool, Manchester City and Chelsea in their next four games as the battle intensifies to qualify for the Champions League via a top-four finish.

Aston Villa are the other team United must face in that period but van Gaal is in little doubt that, with only 10 games left in the season and with Arsenal having ended United's interest in the FA Cup quarter-finals last Monday, this span of games will be crucial.

It is very decisive, the coming matches," van Gaal said.

"Of course, after a defeat at home, it is also important to see the reaction of the team.

"We play against a very good team in Tottenham

We are so close with a lot of clubs

We can be second or third

It is not a big difference I believe.

We have seen that this year

It is not good, surely, if it is the second year (without Champions League football).

But we have the confidence to reach the goal that we have set at the beginning of the season."

Van Gaal must decide whether to continue with Wayne Rooney in attack.

After abandoning the use of the England centre-forward in a midfield position, van Gaal has seen his player score three times in as many games but has warned that Rooney is not guaranteed to remain up front.

"Now, in this moment, I think it is better to play Rooney (in attack)," he said.

"But it can be another line-up on Sunday

It depends on what I see, the game plan of my opponent and then also from the suspensions I have or the injured players.

He has shown that

He has also played - once - as a defensive midfielder."

Back to back victories have helped Tottenham move on quickly from their League Cup final defeat against Chelsea and Mauricio Pochettino's side head to Old Trafford knowing a third successive win would move them level on points with United.

"We are having a great time," said Pochettino

"We go to Manchester United believing in our style and we will try to win three points.

"We have full respect for United but we are very focused on our game, which is the most important thing.

"A lot of teams are fighting for the same target and we are very close, so we know it is very difficult.

"We have 10 games left, we will try to win at Manchester United and after that we will see what happens."

Harry Kane will again lead the Spurs attack after scoring twice in last weekend's 2-1 victory at QPR and this week collecting his second successive Premier League player of the month award.

Pochettino, though, this week singled out one of his lower profile players for praise, insisting left-back Danny Rose deserves international recognition for his efforts this season.

The defender is in contention for a place in Roy Hodgson's England squad for the forthcoming Euro 2016 qualifier with Lithuania and the Spurs manager is in no doubt Rose should be handed a call-up.

"In my opinion, he has been the best English left-back this season," said Pochettino.

"His performances have been great but after that it's Roy Hodgson's decision, not mine."