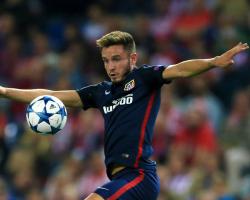 United have a fight ahead of them to secure Champions League football which must be considered a minimum return on the huge sums already ploughed into new recruits in the LVG era.

January could make a crucial difference and club delegates and scouts have been scouring the planet for talent.

The 21-year-old Spaniard can play as a central or defensive midfielder and with United officials sent to do business it looks like a serious effort is being made to secure the player for Old Trafford.

The player is known simply as Saul and he is the product of the Real Madrid and Atletico youth systems, graduating to the Atletico B team before joining the senior squad in 2012

Saul has played at all levels for Spain at international level from U-16 to U21 but is yet to break into the senior squad.