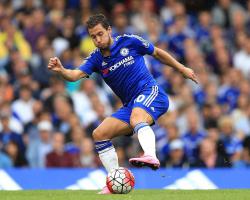 Whilst new boss Guus Hiddink would like to focus on climbing the table he is quick to suggest a relegation battle is a real prospect.

"I think so, relegation is a reality..

we have a little bit more of a breathe, but we have two very difficult games coming up, who have a very good away record in the last 10 games." said Hiddink

The star man of the 2014-15 season was undoubtedly Eden Hazard who's 19 goal haul made him the Premier League player of the year, a fact confirmed by the PFA

The derby clash would be a great time to rediscover some form as the club look to remain unbeaten in January.

The 25-year-old Belgium international signed a five-and-a-half-year contract with Chelsea on the 12th February 2015 but is being widely tipped to move on in the summer with Barcelona and now Manchester United tipped to make bids.

Key for Hazard will be ensuring that he finds some form and stays injury free for the coming Euro 2016 tournament in France but MEN state that Hazard is unhappy at Stamford Bridge and considering his options.