United will be back - Lindegaard 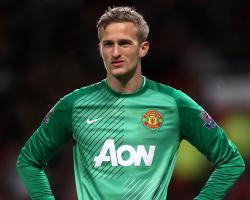 United visit Sunderland in the Capital One Cup semi-final first leg knowing the competition now represents their only realistic chance of domestic silverware this season.

To reach that stage by the first week in January represents a startling fall from grace for a squad good enough to win the Premier League by 11 points last season.

Manager David Moyes has already pledged to do something about it, and speculation of a failed bid for Southampton full-back Luke Shaw provides the first example of it.

And Lindegaard, a United fan from childhood and now back-up goalkeeper to David de Gea, is adamant the quest will be a successful one.

"Manchester United is the most successful club in English football," he said.

"That is not going to change. It is how it is. It is in the genes of the club and is going to continue.

"We are in the middle of the transition. I am sure when the transition is fulfilled we will be as successful as we have ever been."

Merely making a move for 18-year-old Shaw, whom Southampton have consistently stated will not be allowed to leave this month, underlines Moyes is looking long term.

However, the two-legged tie with Sunderland has taken on "must-win" proportions.

For should the Red Devils fail to advance to a Wembley final at the expense of the side rock bottom of the table, terrace disenchantment with Moyes will start to solidify.

Yet Moyes shows no signs of flinching, despite the increased pressure and scrutiny, from outside the club at least.

Michael Carrick, Patrice Evra and Nemanja Vidic should all return after missing the Swansea game, at a stroke providing some much needed experience.

And whilst Wayne Rooney is troubled by a groin problem, the mere fact he was able to play against Tottenham on New Year's Day suggests he will push himself through a game of even more importance providing the scans he had on Friday did not suggest the injury is worse than initially felt.

The unknown is Robin van Persie, who did appear to be nearing a return after a thigh problem, but about whose comeback Moyes spoke in negative terms at the weekend, when the Scot claimed not to know when his key striker may re-appear.

United simply have to make light of such inconveniences, with Lindegaard insistent the club's aims are as high as ever.

"Manchester United is not going to realign if what you mean by that is start to look lower," he said.

"Look at the history of this club. That is not going to happen at Manchester United."