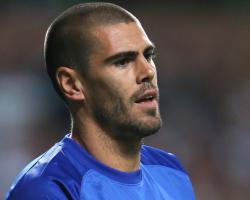 The former Barcelona goalkeeper has been training with United since October and Press Association Sport understands he has accepted the offer of an 18-month contract with the Red Devils.

Manager Louis van Gaal is a big fan of Valdes - he gave the Spaniard his Barcelona debut in 2002 - and he hopes the 32-year-old will provide strong competition for first choice David de Gea.

Valdes was an ever-present during his 12-year spell at Barca, but he will have to fight hard to dislodge De Gea, who has enjoyed a superb season at Old Trafford.

De Gea has 18 months left to run on his deal, but the club are confident he will sign a new contract despite interest from Real Madrid.

Valdes' arrival, which could be formally announced on Thursday, may lead to the exit of Anders Lindegaard, who has not played a game for United since Van Gaal took over.

Valdes would be Van Gaal's seventh signing for United.

The most-high profile of the sextet he signed last summer - Radamel Falcao - says he now feels settled following a mixed start to life at Old Trafford.

Falcao's arrival was greeted with great fanfare on deadline day, but he has only scored three goals for the club.

After starting United's last five games, the 28-year-old is beginning to feel more at home at the club.

"My family are comfortable

We're enjoying life in Manchester and here at the club

The people have been great with me, with my family

Despite spending over ÃÂ£150million last summer, it is one of the club's longest-serving players that has caught the eye of record signing Angel di Maria.

"He plays 90 minutes in every game

He is always committed, giving everything in every match.

"He has this quality, mentality and this hunger to play every game that is incomparable."

Rooney's form has been key to the unbeaten 10-match run which has propelled United up to third in the Barclays Premier League table.

Such a streak seemed unlikely at the start of the season when Van Gaal struggled to get the best out of his stellar squad.

In an interview with MUTV, Van Gaal admitted he felt he had let the club's supporters down at the start of the campaign.

"After 11 matches we had 13 points and when I walked into the stadium, I thought the fans shall not be pleased, but they rose up clapping their hands," the Dutchman said.

"And that was despite the few points we had so I felt myself not so happy because I was responsible and guilty for the results."

Van Gaal received a boost on Wednesday after it emerged Rafael will return to training this week despite fracturing his cheekbone against Yeovil in the FA Cup.

"Operation was perfect back training normal with mask on Friday very happy," the right-back wrote on Instagram.

It remains to be seen whether Rafael will be risked for United's game against Southampton on Sunday.

Ashley Young is out for several weeks because of a hamstring injury, while Luke Shaw (ankle) and Antonio Valencia (groin) are doubts for the game at Old Trafford.