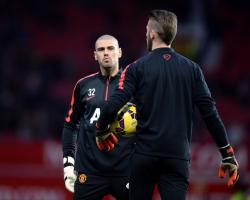 Louis van Gaal won the race to sign Valdes in January, but his only appearances in a United shirt so far have come in the Under-21 side.

Despite being a three-time Champions League winner, Valdes is yet to turn out for the senior team simply because De Gea's form has been nothing short of outstanding.

Valdes bears no ill feeling towards his fellow Spaniard though

He can only marvel at his performances.

"You are always waiting for your opportunity to play and train every day to show your performance to the manager," the former Barcelona goalkeeper told United Uncovered.

"But now David is at a very, very high performance level.

So it is difficult [for me] to play and, of course, I must accept this.

"For me, the top [keeper] now is David

I see him every day in training

I watch him in every game, every week, and his performances right now are amazing."

Negotiations have begun between De Gea and United over an extension to his current contract, which expires next year.

If they are unsuccessful, Real Madrid will surely pounce to sign the 24-year-old, whose Madrid-based girlfriend Edurne Garcia made it clear that she is not a fan of Manchester this week.

Valdes, 33, will have a tough job on his hands winning over the fans if he replaces De Gea in goal next season.

"Every week he makes saves to help the team so I am very happy for him and also for the fans," said Valdes, who is contracted until the end of next season.

"I always hear them sing the song of David de Gea, so I think they are very happy with David for the level of performance he has shown in the last few years

I feel the fans are definitely very happy with the job he is doing."

One of the few times De Gea has been upstaged this season came on December 28 when Hugo Lloris pulled off a number of excellent saves to earn Tottenham a 0-0 draw against United at White Hart Lane.

De Gea still put in a top performance in north London, and on Sunday he is likely to be busy once more when Spurs come to Old Trafford thanks to Harry Kane's form.

Van Gaal, a sincere believer in youth development, has been impressed by the fact that Spurs academy graduate Kane has scored 26 goals in his breakthrough year with the club.

"The way [Kane] is scoring is a reason for their success," Van Gaal said.

"That's one aspect of the world of football that a big talent can stand up in one season and he is doing that.

"I like the process in Tottenham because there also you can see that a lot of experienced players are not playing and a lot of youngsters are playing.

"In spite of that they are also very close (to the top four) and are playing attacking football.

It is not easy to play Tottenham.

"They have a lot of talent

"I hope we can beat them because it will be very difficult again."

Sunday's game marks the start of a tough run of fixtures for United, who then face Liverpool, Aston Villa, Manchester City and Chelsea.

The Red Devils are fourth in the table, just two points in front of Liverpool and three ahead of Spurs.

Van Gaal will be without Robin van Persie on Sunday as he remains sidelined with an ankle injury.

Jonny Evans and Angel di Maria are suspended while Marcos Rojo is a doubt due to a groin problem.