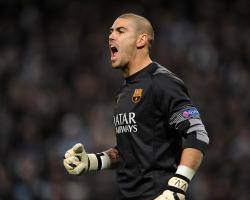 Valdes has been a free agent since leaving the Catalan giants last summer.

The 32-year-old has been training with United for three months in order to help him recover from the anterior cruciate ligament injury he suffered in March.

It is understood an agreement with Valdes is close and an announcement could be made shortly by the club.

The goalkeeper also won the World Cup with Spain in 2010 and the European Championship two years later.

Valdes was an ever-present throughout his spell at the Nou Camp, but he will find it hard to break into the United first team because of De Gea's superb form this season.

The former Atletico Madrid goalkeeper has excelled in several matches, most notably against Everton, Tottenham and Stoke.

But United manager Louis van Gaal knows Valdes well - he gave the Spaniard his debut during his second spell as Barca boss - and views the player as an excellent potential addition to his squad, particularly when he is available on a free.

When asked in October whether he would consider signing Valdes if he returned to full fitness, Van Gaal gave a cryptic hint that it might be a possibility.

Van Gaal's backup goalkeeper Anders Lindegaard was linked with a move away from United in the summer and is yet to play a first-team fixture this season.

United's other two reserve options are Sam Johnstone, who is on loan at Doncaster, and 24-year-old Ben Amos, who was criticised by the United boss for letting in Miralem Pjanic's 60-yard lob against Roma in pre-season.