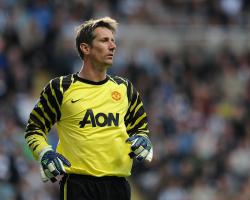 Victory at Stamford Bridge would put United within five points of the Blues, but the fact that the leaders have one game in hand means they are big favourites to lift the Barclays Premier League trophy next month.

Van der Sar admits the title is probably beyond United's grasp this season, but when asked whether the Red Devils could challenge for the championship next year, the former goalkeeper said: "With a little bit of luck, they could have done that this season but for Chelsea winning a lot of those games with late goals - but let's hope so.

"Believing in the philosophy of Louis, at the start of the new season, I think he can bring the club back to the place where it belongs."

United boss Van Gaal revealed this week that he started planning in January to make acquisitions in the summer transfer window.

Mats Hummels, Nathaniel Clyne and Kevin Strootman - amongst others - are on the Dutchman's radar.

Van der Sar, who won four titles at United, believes the club's revival will gather pace if a couple of new signings are added in the window.

"It's been a good turnaround for the club and, if they can hold on to that third place, it's a great position to then maybe strengthen in a couple of areas of the team," Van der Sar told United's website