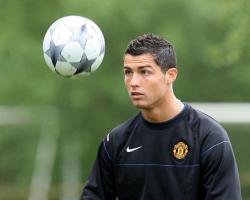 Van Gaal is hoping to mount a serious challenge for domestic and European silverware in the coming year after qualifying for the Champions League in his first term in charge.

Despite spending over ÃÂ£225million since taking over, Van Gaal still thinks his squad lacks speed and creativity in attack.

The Dutchman is therefore on the lookout for a talismanic forward who will help put United on a par with their domestic and European rivals.

"We need still more speed in front and also more creativity," the 63-year-old said in an interview with the British media on United's pre-season tour of the United States.

"That is why I hope (Angel) Di Maria shall stay

When asked what kind of player he needs to make United true competitors in the coming year, Van Gaal added: "I can give examples of champions, Bayern Munich have (Franck) Ribery and (Arjen) Robben, Chelsea have (Eden) Hazard and Willian, Real Madrid - Ronaldo and (Gareth) Bale, Barcelona have Neymar and (Lionel) Messi.

"Manchester United fans want us to compete with these teams.

"(Ashley) Young and (Juan) Mata had fantastic seasons (last year), with assists and goals, but to win the Champions League you need speed also.

"That is why I think, maybe, we still have to buy a player with speed and creativity."

Ronaldo has maintained his status as one of the most destructive players in the world since leaving United in 2009 following six successful years at the club.

Van Gaal has been linked with a move for the two-time Ballon d'Or winner recently.

The Dutchman initially refused to discuss the idea of the Portuguese coming back to Old Trafford.

"I cannot answer this question

You can put it in another way and I shall say it the same," he said.

"We cannot show our strategy in buying or selling players

But when pressed on the matter, Van Gaal dropped his guard.

"Now, I make an exception for Ronaldo," the former Barcelona and Bayern Munich coach said.

"He is a fantastic, fantastic player but he knows that

United round off their tour in the early hours of Thursday morning when they take on Paris St Germain, who want to sign Di Maria, in Chicago.