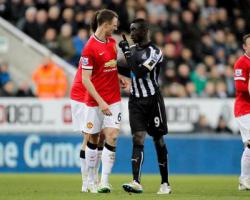 Newcastle striker Papiss Cisse swiftly accepted the same charge levelled at him following Wednesday night's altercation with Evans at St James' Park, and he faces a punishment which could stretch to seven games

United defender Evans faces a mandatory six-game ban if he also accepts or is found guilty of a breach of FA rule E1[a], although he categorically denied spitting at Cisse and Van Gaal stood firmly behind the Northern Irishman, who must respond to the charge by 6pm.

Speaking shortly before the FA announced the charges, Van Gaal said: "He wasn't aware that he was spitting and when he was spitting on the ground maybe that is a natural thing from a human being

I believe him so for me the matter has been done."

The pair clashed in the 38th minute of Manchester United's 1-0 victory, and a panel of former elite referees agreed unanimously they should be charged, with the match officials having not seen the incident

Newcastle managing director Lee Charnley said: "Both ourselves and Papiss agree that this kind of behaviour is not acceptable.

"In life, when you do something wrong you have to front up, admit your mistakes and accept the punishment."

Cisse stands to land a longer ban than six games because of an earlier offence, when he elbowed Everton's Seamus Coleman in December and was also caught out on video evidence

He has pledged to commit himself to extra work in the local area during his suspension and was contrite in a statement.

He said: "I have apologies to make to a lot of people

Firstly to my team-mates and to our supporters, secondly to Jonny Evans, and thirdly to every football fan who saw the incident between myself and Jonny.

"I reacted to something I found very unpleasant

Sometimes it is hard not to react, particularly in the heat of the moment

I have always tried hard to be a positive role model, especially for our young fans, and (on Wednesday) I let you down."

In a statement of his own, Evans firmly denied any wrongdoing.

He said: "I would like to make it clear that I did not spit at Papiss Cisse

"During the game, Papiss Cisse and I spoke about the incident and it is clear by my reaction in the television footage that I was totally surprised by any suggestion of spitting.

"It is not in my character or in my nature to spit at anybody, nor is it something I have ever done or would ever do."