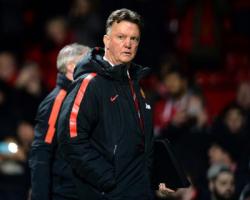 After beating Luton in the third round, Cambridge were handed the money-spinning live television tie they were after when they were pitted against United.

Given that they are 76 places below United in the league ladder, Cambridge should pose few problems to the 20-time English champions, who have added seven players at a cost of over ÃÂ£150million this year.

But, Van Gaal being the perfectionist he is, has not left anything to chance.

The Dutchman has studied his League Two opponents in great detail and is expecting them to try to use their height to cause a huge shock on Friday night.

They have five or six players above 1m 90cm (6ft 3in) so for us it's difficult to defend and that's why you have to prepare yourself very good," the United manager said.

"It's not so easy to beat Cambridge United."

Van Gaal, of course, is right

But it is not just the physical battle United must win.

The players will have to be mentally strong enough to deal with the pressure of knowing that if they lose the result will go down as one of the biggest cup upsets in recent memory.

The 4-0 defeat at MK Dons in the Capital One Cup left a big imprint on his mind.

And if he needed reminding about how easy an upset can happen, he received it from his homeland this week.

"On Wednesday PSV Eindhoven, who are top of the first league in the Netherlands has lost against the third team of the second division (Roda JC)," the 63-year-old said.

"Ajax, Feyenoord and PSV are out

"Surprises shall happen also in the FA Cup

There are always surprises and I hope we are not the surprise.

"It's always tough to play against teams that, in the mind of the players, are weaker.

"In our minds you are believing that we are playing against a weaker opponent but that's not like that.

"It's another opponent with another playing style with other players and we have to beat them."

Van Gaal experienced a similar scenario to the Cambridge match in the third round when his United team had to dig deep to see off League One bottom club Yeovil.

Van Gaal has won cup competitions in Spain, Holland and Germany, but the FA Cup already has a special place in his heart even though he has only played one match in it so far.

"It's different here, there's more in the atmosphere," he said.

"The FA Cup is very important for the fans and the players.

"In Germany it's fantastic if you win the cup but not like here.

"The attendances are better here too

That is another difference."

Jonny Evans and Chris Smalling have been ruled out with unspecified injuries, but Robin van Persie and Luke Shaw are available again.

"I have read in the media that he shall play," Van Gaal said.

"But I cannot answer this question because then I give you my line up and I don't want that."

"You are not sure about no player because it's the transfer month so you never know," Van Gaal said when asked about the future of the only current squad player to have won the FA Cup with United