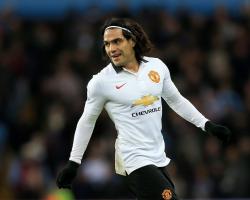 United were hailed as the big winners on deadline day last September when they beat at host of their rivals to sign Falcao on a ÃÂ£6million loan deal from Monaco.

United chartered a private jet to fly the coveted striker over from the principality and the two-time Ballon d'Or nominee was given a standing ovation and a loud roar from the United fans when he made his debut against QPR.

Going into the reverse fixture this weekend, the tables have turned somewhat.

To the bemusement of many fans, a fully-fit Falcao was left out of the squad for last week's 1-0 defeat against Southampton, with Van Gaal preferring to put three centre-backs and 19-year-old James Wilson on the bench instead.

Van Gaal stands by his decision and at a frosty press conference on Friday warned Falcao he still has to demonstrate he is worth more game time, and a permanent move to Old Trafford.

''He has to prove himself, that we have agreed," said the United manager, who has the option to buy the striker for ÃÂ£43.5million at the end of the season.

"We have made this deal and everything is clear and it is not the end of the year so he has the chance for that."

Van Gaal could not care less about how much the player is worth though.

''You have to prove yourself

A player of ÃÂ£95million has to prove himself also.''

Falcao's agent Jorge Mendes rejected to opportunity to quash speculation on his client's future this week.

''The truth is, right now we don't know what will happen,'' Mendes said.

''What we do know is that he will play in one of the very best clubs in the world next season, whether that is Manchester United or not.''

For Van Gaal, the situation is much more clear - a return of three goals in 13 appearances is not good enough.

Van Gaal insists he has no option but to take a hard-line stance with the forward, who has suffered with injury problems since his move.

''If I am not like that, maybe he has less motivation,'' Van Gaal said.

It was also clear that Van Gaal is becoming annoyed by the subject of Falcao's future.

Almost half of the questions at his weekly press conference were on the subject.

Most enquiries about the Colombian were greeted with a short response.

That is for the player and his manager

I'm sorry,'' Van Gaal said when asked about how Falcao had responded to being dropped.

When asked whether Falcao's morale was okay, the Dutchman said: ''I think so.''

And when quizzed on whether Falcao would feature against QPR on Saturday, Van Gaal said: ''You have to wait and see, because when I say that a part of my line-up is known I make it easy for my opponent and I don't want to make it easy.''

Falcao's chances of starting at Loftus Road looked to have been strengthened when Robin van Persie hobbled off in the second half of the loss to Saints with an ankle injury.

But Van Gaal said the striker's injury was not serious, so he has an outside chance of playing this weekend, it seems.

"It is a minor injury

United's defeat to Southampton meant they dropped to fourth and the manager is demanding an improvement.

"When you want to be champion you have to win matches against Southampton and Aston Villa," he said.

Speculation has been rife Van Gaal could boost his squad by signing the likes of Kevin Strootman, Seamus Coleman and Mats Hummels this month.

But Van Gaal played down talk of a January spending spree.

''I don't think that we shall be very active as not many players of a certain level are available,'' he said.

''When we buy a player he has to be better than the players that are playing now and that is a difficult job.''