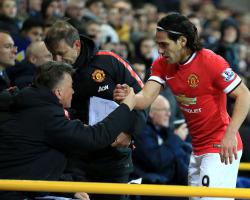 Twenty-four hours after failing to get off the bench for United's FA Cup quarter-final against Arsenal on Monday, the out-of-form United striker turned out for the club's second string.

Falcao, who has scored just four goals since his deadline-day loan move from Monaco, drew another blank when he played 72 minutes of the Under-21 draw against Tottenham on Tuesday night.

The United boss insisted he was not punishing the two-time Ballon d'Or nominee for his poor form by selecting him for the game.

"I have read that it was a humiliation, but I don't think so," Van Gaal said.

Falcao, who played alongside Victor Valdes and Rafael in the 1-1 draw at Old Trafford, failed to score against a youthful Spurs side.

Van Gaal insists the outing for the second team will help Falcao rediscover his form.

"That is one of the aspects that I let my players play in the second squad," Van Gaal said.

"It is not a humiliation

It is a professional attitude of the management, the club but especially also for the player.

"Not only has Falcao played but also Valdes has played and Rafa has played.

That is why we pay a lot for the players, so I think it's normal that they play football also for us

That can be also in the second team."

That said, Van Gaal was not overly impressed with Falcao's showing for the youth side.

I cannot ask more from players."