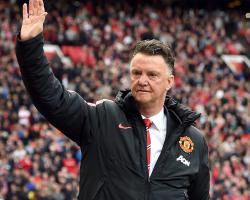 Here is the transcript of the Q&A with the Manchester United manager:

Q: WHY HAVE YOU BROUGHT SERGIO ROMERO TO THE CLUB?

A: "I think that in our circumstances, with the threat that David de Gea is going to Real Madrid, we have to prepare our season and I think Sergio Romero can fulfil that because you have to handle very quickly when it may happen with David de Gea

And I think it is a very good choice

He is the Argentinian goalkeeper

He has international experience

I know him very well because I picked him when he was 19 years old to (sign for) AZ (Alkmaar), my former club, so I know him

I know also his character so I hope he can have a contribution to our selection and I have that confidence that he can give that."

Q: WILL YOU USE YOUR GOALKEEPERS MORE NEXT YEAR? LAST YEAR YOU STUCK WITH DAVID DE GEA THE WHOLE WAY THROUGH...

A: "I cannot say anything about that because players have to prove (themselves)

Players put themselves in the line-up, the manager is not doing that, believe me

When I see that a player is better than the player in the line-up, he shall play the next match."

IF DAVID STAYS, HE MAY NOT BE HAPPY SITTING ON THE BENCH ALL THE TIME...

A: "I have of course spoken with Sergio and also with David and with me always the best shall be in the line-up so you have to fight and I think in a top club as Manchester United you always need competition

And that's why we are buying the players."

Q: HOW HAS HE DEVELOPED SINCE HIS TIME AT AZ?

A: "I don't think that he has made so much progress because he did not play so much in the clubs after (he left) AZ and still he was the best Argentinian goalkeeper, so I know what he can (do) and of course I saw him in the World Cup (semi-final) because he stopped our penalties very well and that is why were not in the final, but I have seen him in the World Cup but I remember him especially from my former time and then I know what he can do, so he is a very dominating goalkeeper, he dominates the 60-metre area, I think that is different in England

He has to prove that

Of course, he has to learn English because that is also a problem always with a foreigner

Yeah, I have a lot of confidence that he can fulfil what we are expecting, but always with when you buy players you have to wait and see."

Q: HOW DO YOU REFLECT ON YOUR FIRST YEAR IN CHARGE? WAS IT A CASE OF OBJECTIVES MET BY QUALIFYING FOR THE CHAMPIONS LEAGUE?

A: "We haven't qualified ourselves for the Champions League (yet) because we still have to play a match and that is not so easy

But it is our goal, and our aim also

The positions are occupied double

But we don't know that (he will) so we have to wait and see."

Q: HOW DIFFICULT IS IT TO BRING IN THAT KIND OF PLAYER IF YOU HAVE TO? YOU KEEP BEING LINKED WITH RONALDO

DO YOU NEED TO SIGN THAT KIND OF PLAYER?

I can give examples of champions, Bayern Munich - they have (Franck) Ribery and (Arjen) Robben, Chelsea - they have (Eden) Hazard and Willian - speed and creativity

Manchester United fans want us to compete with these teams

Barcelona have Neymar and (Lionel) Messi

(Ashley) Young has made a fantastic season

(Juan) Mata the same, with assists and goals but to win the Champions League we need speed also

That is why I think, maybe, we still have to buy a player with speed and creativity."

Q: HOW HARD IS IT TO GET THAT KIND OF PLAYER?

A: "It's very difficult

It is not so easy because you have always three parties - the player himself, the club and then also the availability of the money in Manchester United."

Q: WHAT DO YOU NEED FROM WAYNE ROONEY THIS YEAR?

A: "He is our striker

Probably he has to prove it

I have full confidence that he shall do that

We have still (James) Wilson

He did it very well so we have enough choices to make."

A: "Of course, of course, because (Sergio) Aguero is making that amount of goals."

Q: HOW SETTLED ARE YOU IN MANCHESTER

HOW HAVE YOU FOUND IT? WHAT IS THE SHORT-TERM AND LONG-TERM PLAN FOR YOU?

A: "The short-term is to improve every day, that my selection is performing every match better

And the long-term vision is to make a championship or an FA Cup or a Champions League, that's the long-term."

Q: THERE HAVE BEEN ACCUSATIONS OF YOU TRYING TO BUY THE TITLE

DO YOU SEE THAT AS CRITICISM AND IS IT JUSTIFIED?

A: "You have seen playing yesterday (against Barcelona) the second half? The players? How old are they? (REPORTER SAYS: THE AVERAGE AGE WAS MAYBE 21 OR 22)

HE IS A BIT OF A HOLY GRAIL FOR UNITED FANS...

Q: HOW REALISTIC IS IT FOR UNITED FANS TO THINK THAT ONE DAY HE WILL COME BACK TO OLD TRAFFORD?

A: "I cannot answer this question

We cannot show our strategy in buying or selling players

But not in a process and not in a strategy

I cannot say that

I want to say that

For the fans I want to say that

The culture, the structure, the people in the organisation

Then I have to answer these questions

I cannot do that."

Q: BUT I PRESUME YOU WOULD SEE RONALDO AS THE SAME BRILLIANT PLAYER THAT EVERYONE ELSE DOES?

A: "Now, I make an exception for Ronaldo

He is a fantastic, fantastic player

But he knows that

Q: YOU MENTIONED THE OTHER DAY YOU HAD GOT RID OF 17 PLAYERS..

DID YOU REALISE WHEN YOU TOOK THIS JOB THAT YOU WOULD HAVE TO MAKE EXTENSIVE CHANGES?

But you know also that, at that time you won the league you played already with a lot of players above 30 years (old)

I also believe in change because it gives all the players a new challenge and also to prove themselves with the new player."

Q: SIR ALEX FERGUSON HAS BEEN HERE IN SAN JOSE

WHEN DAVID MOYES WAS MANAGER PEOPLE SAID THAT WAS UNHELPFUL FOR HIM TO BE AROUND BECAUSE IT ADDS PRESSURE...DO YOU THINK LIKE THAT?

Q: IS THAT A RIDICULOUS THING TO SAY (THAT FERGUSON'S PRESENCE ADDS MORE PRESSURE)?

I want to talk with him

I talk with him a lot of times

He is sitting in the board, so he has to judge on me

But there is nobody in this world who can push me more than myself."

Q: WHAT IS THE OBJECTIVE FOR THE SECOND YEAR OF YOUR REIGN?

A: "You want always more

In my other teams I was already, in my first year, a champion so I hope that we can manage that in three years' time

But when it is this year I am very happy

But I cannot say this year we shall be the champion

We have to fight for it

That is the most important thing

Until the end we have to challenge the number one

And maybe we are."

Q: HAVE YOUR NEW SIGNINGS MADE YOU STRONGER PHYSICALLY?

That is the word, more balance, what I have used in all my press conferences

Now when they are here, I say 'OK, our team is more balanced'

Because of the buy of (Matteo) Darmian also

But especially the midfielders because, for example, I have to play with (Marouane) Fellaini and (Ander) Herrera in the holding midfield positions and they were not used to playing in that position

That is why we have bought Sergio Romero, so we have another first-class goalkeeper next to David de Gea, so we are prepared."

Q: DO YOU NEED MORE CREATIVITY AND SPEED TO BREAK DOWN TEAMS WHO DEFEND DEEP AND GET MEN BEHIND THE BALL?

A: "Yes but then Ashley Young and Juan Mata can do the job also

When clubs shall park the bus, Young and Mata are creative

But, especially Mata, has not high speed

But creative, he is

That is not a problem

It is when, like yesterday, when we are more compact and in a certain pressing situation, we can use the speed

I think we created more chances as Barcelona and also bigger chances."

Q: CAN YOU SEE YOURSELF STOPPING WITH UNITED BEYOND THE END OF YOUR THREE-YEAR CONTRACT?

A: "I cannot answer that because then my wife is very mad

Q: BUT SHE WOULD LIKE YOU TO STAY ON, WOULDN'T SHE?

Q: BUT YOU DON'T GIVE THIS KIND OF JOB UP EASY, DO YOU?

I promised that to my wife

We have not many years together any more

That is the reason

I have to admit I have said to her, when I met her and after our relationship seemed to be very good, then I said at 55 years I shall quit

Q: IS IT NOT HARD TO WALK AWAY FROM?

A: "I have done everything in my career as a manager

I have been in the Netherlands, your home country

I have been in Spain, fantastic league

The only wish was the Premier League

Now I am here

And also to participate in a world championship or European Championship

I have done that

I have to go to Qatar to earn still more money? I don't think so

You have to enjoy also your life and your relationship with your wife."

Q: AND WIN THE PREMIER LEAGUE BEFORE THAT..?

That is why I want to do that in three years."