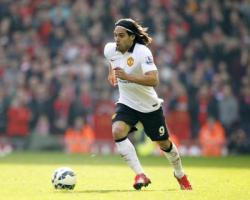 Falcao scored three goals in two games against Bahrain and Kuwait over the last week and although those teams are hardly international heavyweights, his clinical performances can only have helped his confidence after a miserable spell at Old Trafford.

The 29-year-old hasn't started for United since late February, has just four club goals all season and seems almost certain to be sent packing when his season-long loan from Monaco expires at the end of the current campaign.

But, with United in the thick of the race for a top four finish in the Premier League, which guarantees a Champions League place, van Gaal must decide whether Falcao's recent goal-scoring flurry is worthy of a first team call-up at Old Trafford this weekend.

Falcao himself is certain his form would improve with a prolonged run in van Gaal's side.

"I need to play," said Falcao

"I need minutes and I am confident about myself, about my fitness."

United are also in buoyant mood having gone into the international break on the back of a memorable 2-1 win at Liverpool, although captain Rooney has warned his side must avoid failing to capitalise on that result when they face Villa.

"Yes, it was a six-pointer at Liverpool but that means nothing if we don't beat Aston Villa on Saturday," Rooney said.

"Obviously Arsenal play Liverpool as well so if we can get the win against Villa that will be an even better result than Liverpool was for us.

"There are still eight games left but we are in a good position at the minute so it's in our own hands, we have to make sure we do it."

United should have defender Chris Smalling available against Villa, despite him coming off while on England duty due to illness

Tim Sherwood, meanwhile, insists his Villa team head to Old Trafford with nothing to fear.

Villa begin the weekend in 16th, just three points clear of the relegation zone, but have won two of their last three league matches under Sherwood.

It marks the start of a pivotal month which includes a clash with fellow strugglers QPR on Tuesday and an FA Cup semi-final at Wembley against Blackburn or Liverpool.

"The Manchester United game is the only game we are focusing on, we need to get something from this game," Sherwood said.

"I think they are beatable, any team can beat anyone, that's the beauty of the Premier League.

"We have a lot of pace in the team in counter-attack so we will be looking to exploit that.

"We will show them respect, they are very near the top of the league now, but we also need to impose ourselves.

"It is a wonderful place to go, not many have gone there and got a result but there are a few in our dressing room that have

I still think it is an unbelievably tough place to go."

Sherwood's injury concerns are easing with Ron Vlaar, Philippe Senderos (both calf) and Joe Cole (hamstring) all pushing for recalls after returning to training.