Van Gaal- This is my last club 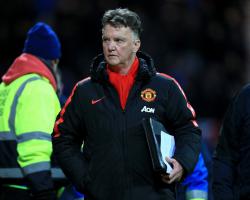 Van Gaal has enjoyed a stellar career that has taken him from Holland to Spain, Germany and now England, where he is contracted with United until 2017.

The 63-year-old is enjoying his spell as United manager, but plans to walk away from football once his tenure is over as he wants to spend time with his wife Truus in their holiday home on the Algarve.

This is my last job

For sure," the Dutchman said in an interview with the Daily Telegraph.

"I have to pay attention to my kids, my grandchildren but also to my wife

"Now I cannot pay that attention

I was not at the birthday of my grandson for example

"My wife wants to quit now already! Five years ago!

"I have a paradise in Portugal

I want to quit to go there, play golf, eat fantastic food."

Van Gaal praised the United fans for the support they have given him during a mixed first year at Old Trafford.

United have played some unimaginative football at times this season but they hammered Tottenham 3-0 last weekend to strengthen their hold on fourth place in the Barclays Premier League.

Van Gaal has managed Barcelona, Ajax and Bayern Munich during his career, but regards United as the biggest club on the planet.

"We were in the USA (in pre-season) and we played against Real Madrid, Liverpool, Roma, Inter Milan and LA Galaxy, five matches in three weeks - 300,000 fans and I think 280,000 of them in a red shirt

I know that Manchester United is the biggest club in the world," he said.

Di Maria sat out the win over Tottenham after being sent off for tugging referee Michael Oliver's shirt in United's FA Cup defeat to Arsenal.

The ÃÂ£59.7million midfielder knows the next four fixtures - against Liverpool, Aston Villa, Manchester City and Chelsea will ultimately make or break United's season.

"We are all aware that a number of big games are just around the corner, and the season will be decided by these fixtures," Di Maria told United Review.

We've known that everything would be at stake over this final period of the season."

United lead Liverpool by just two points but they are also only two points shy of second-placed City.

Di Maria is optimistic about the chances of United finishing in the top four.

He added: "Everyone at the club is 100 per cent confident, we know we want to get back into the Champions League and that we want to be fighting it out.

"We'll battle hard right to the end of the season

From what I know of the club, United always fight right to the end and that's what we're going to do."