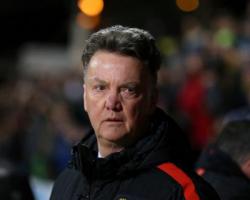 Van Gaal is under contract with United until 2017 and he will walk away from the sport for good either when that deal expires or at the end of any extension.

The 63-year-old former Barcelona, Bayern Munich and Netherlands coach is enjoying his spell at United, but is keen to end his illustrious managerial career once his tenure is over as he wants to spend time with his wife Truus in their holiday home on the Algarve.

This is my last job

For sure," van Gaal said in an interview with the Daily Telegraph.

"I have to pay attention to my kids, my grandchildren but also to my wife

"Now I cannot pay that attention

I was not at the birthday of my grandson for example

"My wife wants to quit now already! Five years ago!

"I have a paradise in Portugal

I want to quit to go there, play golf, eat fantastic food."

United have played some unimaginative football at times this season but they hammered Tottenham 3-0 last weekend to strengthen their hold on fourth place in the Premier League.

Although he has managed European giants like Barcelona and Bayern during his career, he regards United as the biggest club on the planet.

"We were in the USA (in pre-season) and we played against Real Madrid, Liverpool, Roma, Inter Milan and LA Galaxy, five matches in three weeks - 300,000 fans and I think 280,000 of them in a red shirt

I know that Manchester United is the biggest club in the world," he said.