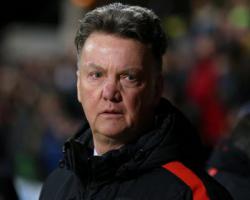 Cambridge, the lowest-ranked side remaining in the FA Cup, deservedly earned a fourth-round replay at Old Trafford, leaving Van Gaal to bemoan the circumstances of the match.

"Every aspect of the match is against us," the Dutchman said.

"We have to come here, the pitch is not so good, but that can influence also that you play in another playing style.

"The opponents are always giving a lot more than normally

And defending is always easier than attacking.

"Then you have seen the referee (Chris Foy)

It's always the same

Van Gaal refused to expand on his appraisal of Foy, but was critical of his side's first-half showing, believing they played Cambridge's game, rather than their own.

He added: "We played in the same playing style as the opponent and that we don't have to do."

Van Gaal said before the game that a 4-4-2 formation gives him a "twitchy ass" but he selected four at the back due to it resulting in more chances.

"I know the statistics of our former performances

"(But) it is not only the system

It is also the performance of the system.

"It is not so easy to change the system or something

That is not the solution

Van Gaal rested Wayne Rooney and Juan Mata but did not rue the decision with hindsight.

"I'm not regretting that," he said.

Josh Coulson might have scored following pinball in the United box in the first half, while Chris Dunn saved from substitute Robin van Persie and Angel di Maria in quick succession to earn a replay in Manchester which will provide a major financial boost for the U's.

Asked if he thought Cambridge, promoted to League Two last season after nine years outside the Football League, can go to Old Trafford and win, head coach Richard Money said: "No

I don't, but you never know.

"We've said in the dressing room 'You're going to Old Trafford

Who cares what happens? Just go and enjoy it, soak it in

"This club has been in the doldrums for 10 years, out of the Football League, and suddenly here we are taking everybody back to Old Trafford

Money said earlier in the week that his players would have to pay for a new shirt if they swapped with their opponents.

"Not one player asked me (if they could swap)," Money added.