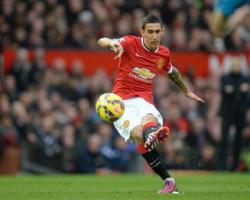 Van Gaal broke the British transfer record to sign Di Maria from Real Madrid last summer, but after a bright start his star has faded quickly.

The Argentinian has not scored in the Barclays Premier League since the first week of October and has provided eight assists despite costing the club ÃÂ£59.7million.

On Saturday Di Maria put in possibly the worst performance of his career against Sunderland and he was substituted at half-time.

As Van Gaal pointed out, Di Maria is not the only player to have struggled at United this year

The Dutchman believes many of his summer signings have found it hard to hit the ground running and he believes they may all take 12 months to acclimatise to the Premier League and the surroundings.

"The first season is always difficult," the United boss said.

"You can say it to every player we have bought: (Luke) Shaw, (Daley) Blind, (Ander) Herrera, (Radamel) Falcao and also Di Maria.

"In the Netherlands, Spain and Germany I had the same experience with players.

"We have to give him time, not just for him but to all the other players.

"(The time frame) is dependable on the individual as there are so many different aspects of the game, of the match but also of the culture in the country."

Di Maria's season has been interrupted by pelvic and hamstring injuries.

He also had to move out of his house last month after he and his family were subjected to a terrifying attempted burglary.

The midfielder, his wife Jorgelina Cardoso and their young daughter Mia were inside their Prestbury home last year when intruders tried to enter but they fled after the alarm was raised.

Van Gaal thinks it would be too simplistic to blame Di Maria's dip in form on the incident.

"It is easy to say that, because I cannot prove that, it is not scientifically proven and I don't want to speak about things I cannot say," he said.

Van Gaal has no qualms about selecting the 27-year-old for Wednesday's trip to Newcastle.

"Di Maria is not the only player who has suffered a bad day," Van Gaal added on MUTV.

He has trained very well and I don't think there is any problem."

Van Gaal will not be able to call upon Robin van Persie for the game at St James' Park and he is unlikely to risk Michael Carrick, even though he has overcome a calf problem and has trained with the squad this week.

"I think it is too early for Michael Carrick, he trained now three training sessions with us," said Van Gaal, who only put the midfielder on the bench for the 2-0 win over Sunderland because Phil Jones and Luke Shaw pulled out at the last minute through illness and injury respectively.

The duo are available for the Newcastle match.

Van Gaal was reluctant to say when he thought Van Persie would return from the ankle problem he suffered against Swansea 10 days ago.

"We have to wait and see

I cannot say anything about that but it is not a heavy injury."