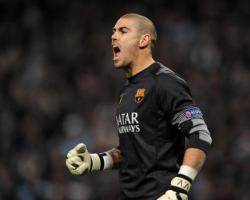 After a rocky start, De Gea has become firmly established as United's number one since signing from Atletico Madrid in 2011.

The Spain international is enjoying an outstanding season under new boss van Gaal and is emerging as one of the best goalkeepers in the world.

But the 24-year-old, who is yet to accept the new contract on offer from United to replace his existing deal which expires at the end of next season, has not previously faced the kind of competition Valdes will bring.

The 32-year-old offers the pedigree of a three-time Champions League winner and six-time La Liga winner from his time at Barcelona.

And after proving his recovery from a serious knee injury which blighted the end of his career with Barcelona last season and ended his hopes of playing in last year's World Cup, Valdes is not at Old Trafford just to see out his career.

Van Gaal, who signed free agent Valdes an 18-month contract, said on Friday: "Nobody is happy to be number two and he has to have an ambition to beat David de Gea, although it will be very hard for him.

"My ambition is to have the best players who can collaborate with each other to form the best team in the world.

"Of course when you invite Victor to have his rehabilitation here at Manchester United you do that for him but also for yourself.

"I then had the chance to see him, to see his behaviour in rehabilitation but also if his quality is still the same and he has confirmed both

That's very important for me and also for him.

"When I am satisfied then mostly the players are also satisfied."

Valdes' signing is likely to spell the end of Anders Lindegaard's time at United with the Denmark international expected to move on.

Valdes could be on the bench for the first time against Southampton at Old Trafford on Sunday when van Gaal admits he will face a rare selection dilemma.

Having seen his options massively reduced by injuries since taking over last year, the United manager confirmed that winger Ashley Young, out for up to six weeks with a hamstring injury, is his only absentee as United look to extend their 10-match unbeaten run.

United are hoping to pull clear of Southampton -- a point below them in fourth place in the Premier League -- with a repeat of the victory they enjoyed against Ronald Koeman's side on the south coast just over a month ago.

"I have only one player injured

I have to select for the first time in my career at Manchester United, the 11 and the 18 players," van Gaal said.

"I have to select the best team and watch the qualities of Southampton and hope I can reduce that quality by our line-up and our game plan."

Van Gaal stressed that not all of his players are 100 per cent fit.

But defender Daley Blind, out since mid-November with a knee injury sustained on international duty with the Netherlands, is back in full training, along with Marcos Rojo and Marouane Fellaini, who have both been out for a month as United near a rare clean bill of health.