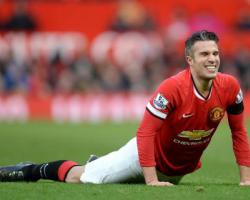 Van Persie has missed Manchester United's last six games following an ankle injury he suffered in the 2-1 defeat at Swansea on February 21.

Manager Louis van Gaal said last week he did not expect the striker to be fit enough to return for Sunday's game against Manchester City at Old Trafford, but Van Persie reported good news for United fans on Wednesday.

The 31-year-old tweeted: "Back to training with the group today

Was a great session

Happy to be fit and able to play again

Looking forward to my next game!"

Even if Van Gaal considers Van Persie to be fit to take part in the derby, it is hard to see how the former Arsenal front man would fit into the starting XI.

United have hardly missed the Dutchman, who has scored just 10 goals this term

During his absence, the Red Devils have only lost once - against his former employers Arsenal in the FA Cup

United have recorded creditable victories over Tottenham and Liverpool and last Saturday they moved above City into third with a 3-1 win over Aston Villa.

Wayne Rooney scored a stunning volley during the win

The United skipper has performed well up front in a 4-3-3 formation alongside Ashley Young and Juan Mata, who scored both goals in the 2-1 win at Anfield two-and-a-half weeks ago.

Victory for United this weekend would pile more misery on out-of-form City and improve Van Gaal's chances of achieving his target of Champions League qualification.

Once he returns from his summer break, he is likely to take United on a shortened pre-season tour, with the most likely destination the United States, it has emerged.

Van Gaal made no secret of his annoyance at United's pre-season schedule last summer.

United travelled almost 13,500 miles on the trip, which included games in Los Angeles, Denver, Detroit, Washington DC and Miami - all against high-profile opposition.

The trip will have to be over a shorter period of time too as the Premier League season begins on August 8 - just eight weeks after the end of the international break.