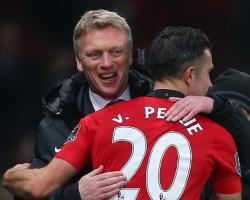 Moyes has an unwanted 12-year record of failing to achieve an away win at Chelsea, Liverpool or Arsenal - and Everton only managed to do so at Old Trafford after he had switched clubs.

Victory over Swansea last weekend brought an end to a three-game losing run, but Chelsea at Stamford Bridge remain an intimidating prospect.

United are desperate for a win to maintain hopes of making the Champions League, but they trail Premier League leaders Arsenal by 11 points.

The club's struggles to maintain the level of the Sir Alex Ferguson years has been mirrored by a drop in the value of the club's shares on the New York Stock Exchange.

The shares hit 14.75 US dollars early on Thursday, the lowest point of the last 12 months, before then recovering to 15.19 dollars at the close. It means the paper value of the club has declined by more than Â£250million compared to last May.

Van Persie though is certain that, given time, Moyes will succeed.

He said on www.guardian.co.uk: "I think he needs time like everyone, especially if you are new at such a big club.

"And to be fair, I think people understand that they have to give him a little bit more time, and I am talking about fans or even us. He will get that time and everyone is convinced that we will change things sooner than later.

"We lost many points this season, too many in our opinion, because if you want to go for all the trophies, you have to play better and get more wins in but we are doing everything we can to change that.

"The manager is our leading man in that case and he is trying his best and I think he will turn things around."