Van Persie- New deal not up to me 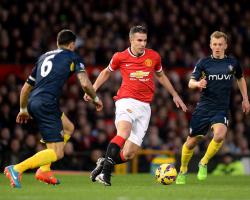 Van Persie enjoyed a successful World Cup with Holland under United boss Louis van Gaal but he has yet to replicate that kind of form at club level.

Van Persie scored 30 goals in his debut year at Old Trafford, but last season he struggled for fitness and form and this term he has found the net eight times.

The 31-year-old's contract ends in the summer of 2016, and when asked if he would like to extend that deal, the striker said: "It is not up to me

For the moment I am staying here for 18 months.

"That is it really

I can't look into the future

I don't know what is going to happen after that

We shall have to wait and see."

Van Persie was refreshingly candid when discussing his poor form at the launch of Manchester United's new partnership with Swissquote at Old Trafford on Monday.

Others are guilty of under-performing too

United's 0-0 FA Cup draw with Cambridge last week was littered with mistakes, while in the Premier League the Red Devils have just three points more than they had at this stage last term.

"Obviously we are not scoring enough goals, including me," Van Persie said.

This year I have played something like 20 games and I have scored eight goals.

"I am not happy with that

I want to score more

I will do everything, every day in training and during the games I will keep doing what I have been doing for the last 10 years to make those goals

It makes so many people happy

"I am convinced that if we keep doing what we are doing - because we do create chances - if the strikers just take those chances I think we have a chance of scoring again.

"It is a very thin line between scoring a load or goals and only a couple."

Although Van Persie's confidence may have taken a hit because of his poor start, his faith in his manager has not wavered one bit.

Van Gaal made Van Persie his captain with the national side and the move paid off as the unfancied Dutch team made it through to the World Cup semi-finals last year where they were defeated on penalties by Argentina.

It is not just Van Persie who believes in the 63-year-old.

The former Arsenal striker insists the rest of his team-mates are fully behind their manager.

"I have known him for over two years now, I know how he works," Van Persie added.

"We believe in him

We will still believe in him.

"The players have been working with him only four or six months, everyone believes in themselves, our team-mates and our staff

We are confident it will change

"Him and his coaching staff and we as players are trying everything we can to win games, not only win games but win them in a nice way as well."

The forward, who won the FA Cup with Arsenal, has been encouraged to see the likes of Chelsea, Manchester City and Tottenham exit the competition, though.

"After the game against Cambridge, everyone was a little bit down," Van Persie said.

"But in a way on Saturday the whole mood changed

City were out, Chelsea were out and suddenly we are in it with a home tie against Cambridge.

"We are the highest-ranked team left in the competition."

Van Persie is desperate to win the cup with United, who have gone through a barren spell in the competition of late.

"I think it is vital (we win a trophy this year), especially with this cup," he said.

"I think it has been 11 years since Manchester United won it last.

"That was actually the first thing that Sir Alex Ferguson said to me as well - he said 'I want to win that cup'.