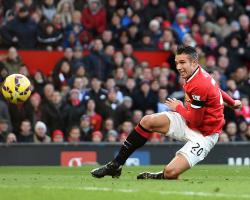 Van Persie scored his first goal for over a month to put United ahead and Radamel Falcao got on the scoresheet before Wes Morgan's own goal sealed the win, which moves Louis van Gaal's men up to third in the Barclays Premier League.

Marcin Wasilewski scored in the second half, but the Foxes were unable to pull off another great comeback like they did in the reverse fixture last September, which ended 5-3 to Leicester.

Van Persie spoke candidly this week about how disappointed he was with his form this season.

The Dutchman said his performances had not been up to scratch and conceded he did not know if he had done enough to earn a contract extension.

But on Saturday he looked something like the Van Persie who scored 30 goals in his debut season at the club.

The Dutchman watched Daley Blind's chip pass over his left shoulder before expertly stabbing the ball past Mark Schwarzer with his right boot.

Replays showed the 31-year-old may have been slightly offside, but he did not care.

The win - and the fact that they scored three goals - will give confidence to Van Gaal's team, who had scored just five goals in their previous six matches.

For the first 20 minutes, United looked just as flat as they did in their last home match - the 1-0 defeat to Southampton.

The tempo was slightly quicker, but Leicester goalkeeper Schwarzer remained untested in the opening exchanges.

The home fans became annoyed at their team for not going on the attack against the bottom team in the division.

Too often they passed the ball sideways or backwards.

Nothing seemed to be going for the hosts

Rooney's attempted cross-field pass ended up in the East Stand.

Angel di Maria showed his class by chesting down a Leicester clearance, but he followed it up by putting his volley into the crowd too.

Van Persie spurned an opportunity moments later, scooping a shot high and wide from the edge of the area.

The home supporters needed a goal to lift their spirits and Van Persie delivered it in spectacular fashion just before the half hour.

The striker showed true class by watching the ball over his shoulder before stabbing past Schwarzer first time for his ninth of the campaign.

Van Persie started the move, brushing his man off the ball to find Di Maria

Schwarzer spilled the Argentinian's shot and Falcao scrambled home his fourth goal of the season just before Ritchie De Laet and Wasilewski could intercept.

United were now playing at their free-flowing best

Falcao and Di Maria exchanged passes in a quick counter, but they could not test Schwarzer.

With Leonardo Ulloa isolated up front, Leicester could offer little on the attack and two minutes before the break they found themselves 3-0 down.

Rooney's corner skidded off the head of Blind and Morgan, who was caught out by the flick-on, accidentally diverted the ball into his own net.

Leicester's supporters, rather optimistically, insisted they were going to win 5-3 again.

Just after introducing Esteban Cambiasso at the break, the Foxes hit United on the counter, but Kramaric's attempted bicycle kick failed spectacularly.

United remained by far the superior team though

Adnan Januzaj, making his first league start in almost three months, wanted in on the act, but his swirling 25-yard shot dipped just over Schwarzer's bar.

Ulloa had a pretty desperate penalty appeal turned down when he slipped in the box on the hour.

A brief moment of panic followed when substitute David Nugent nudged last man Phil Jones off the ball, but David de Gea came out to stop the former England striker.

Van Persie earned a standing ovation when he came off with 22 minutes to go.

Leicester grabbed one back when Wasilewski headed in at the far post, but there was not enough time to mount another comeback and United coasted to victory.