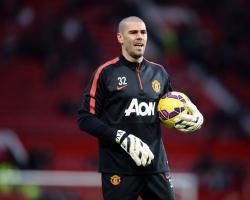 The 34-year-old is expected to join Belgian side Standard Liege after a hugely frustrating spell at United, where he has not made a single appearance or even been given a shirt number this season.

The former Barcelona player posted a message on Twitter above a picture of United's training ground saying: "Thank you all for your support during these months of hard work for me. I will never forget! See you soon!"

Valdes signed an 18-month contract with United after moving to Old Trafford a year ago but fell out with manager Louis van Gaal over the summer.

He did not go on the summer tour to the USA and was not permitted to train with the first-team squad.

Valdes won the Champions League three times at Barcelona and has also won the World Cup and European Championship with Spain.