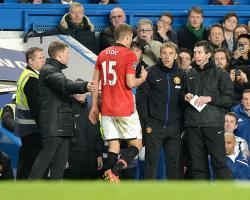 Vidic's claim for wrongful dismissal was rejected by an independent regulatory commission on Tuesday.

He was sent off in United's 3-1 defeat on Sunday for a foul on Eden Hazard.

The 32-year-old Red Devils captain will now miss the Capital One Cup semi-final second leg against Sunderland on Wednesday and Barclays Premier League games at home to Cardiff and away to Stoke.

His absence is a blow to David Moyes' struggling side, whose season suffered another setback in their comprehensive defeat by Chelsea, which left them 14 points off league leaders Arsenal and six off the Champions League places.

The Serbian will be missed by a defence which has looked particularly vulnerable in recent matches, having conceded nine goals in five games.

Two months after his arrival from Spartak Moscow, Vidic was introduced as an 83rd-minute substitute as United hammered Wigan at the Millennium Stadium in 2006.

However, given Vidic's only other appearance in the competition that season was on his debut in the semi-final against Blackburn, and that was only for four minutes, the Serbia star felt there were others more deserving of the medal.

And given Rossi had started three matches earlier in the competition, and not even made the bench in Cardiff, Vidic opted to hand the medal over.

"I only played for a few minutes in the final and got the medal and, afterwards, even though it was a nice feeling and I felt part of the team, I gave my medal to Giuseppe Rossi because I felt it would be better to give it to someone who had played more minutes than me in the competition," Vidic told www.manutd.com.