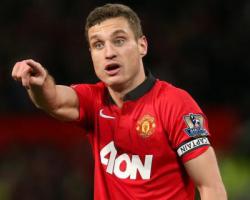 The Serbia defender's contract expires in the summer and, while manager David Moyes has spoken about the positive influence Vidic still has at United and indicated he wanted him to stay, it is not thought he was offered an extension and he has now decided to move on.

"I have decided that I will move on at the end of this season," said Vidic, in a statement released by United.

"I want to challenge myself again and try to make the best of myself in the coming years.

"I'm not considering staying in England as the only club I ever wanted to play for here is Manchester United and I was lucky enough to be part of this club for so many years.

"I've got a few options to move on and I will choose the right one for me and for my family."

Vidic is free to talk with clubs outside England under the Bosman regulations, with Inter Milan believed to be one of the front-runners to acquire his services.

Reaction to the 32-year-old's impending exit from United fans will be interesting.

The player has been one of the most popular members of the Red Devils' squad since he arrived from Spartak Moscow for ?7million - a transfer bizarrely announced on Christmas Day in 2005.

He has played a central role in virtually all United's significant triumphs since then - Vidic did recently reveal he handed his first winners' medal from the 2006 Carling Cup to Giuseppe Rossi as the Italian had played in all the previous matches up to the final.

Last May, Vidic skippered United to their historic 20th championship - his fifth and the last under Sir Alex Ferguson.

However, the tough defender made only 19 league appearances as he battled to overcome a serious knee injury, suffered in a Champions League defeat to Basle in December 2011 that required two major operations, ruling Vidic out for extended periods on both occasions.

It was argued by some that Vidic has never been the same player since, although for experience alone he would still be an invaluable presence, especially as long-time defensive partner Rio Ferdinand seems certain to be leaving as well in the summer.

"It's the last year of my contract and I have had eight wonderful years here," Vidic said.

"My time at this great club will always rank as the best years of my career.

"I never could have imagined winning 15 trophies and I will certainly never forget that fantastic night in Moscow, memories that will live with me and the fans forever."

That Champions League triumph over Chelsea at the Luzhniki Stadium in 2008 remains the high point of Vidic's entire career, given he subsequently featured in the final defeats to Barcelona in both 2009 and 2011, by which time the former Red Star Belgrade man had been elevated to captain.

Vidic's overall contribution is underlined by his presence in the PFA Premier League team of the season on four occasions and the FIFPro World XI twice.

There are bound to be some who feel the defender, who is available for Sunday's Old Trafford encounter with Fulham after serving a three-match suspension following his dismissal in the Premier League defeat at Chelsea last month, is jumping off a sinking sink.

With United stuck in seventh spot in the Premier League and Moyes facing a major rebuilding job amid questions - from some outside the club - about his suitability as Ferguson's successor, it did seem Vidic's trophy-winning days in England were at an end.

Barring an unlikely Champions League victory in May, that has now been confirmed, although Vidic will go down as one of the great United central defenders.

"I am now going to focus all my efforts on playing for Manchester United and do the best I can for the team until the end of the season," he said.

"I hope this stops any further speculation about my future."