Vidic- United are out of title race 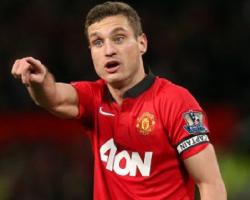 United lie 14 points behind leaders Arsenal following the 3-1 defeat to Chelsea at Stamford Bridge on Sunday.

United captain Vidic, who was sent off late in the game for a challenge on Eden Hazard, thinks his side should concentrate on qualifying for the Champions League by finishing in the top four.

Samuel Eto'o scored a hat-trick before Javier Hernandez netted a consolation for David Moyes' side.

Unlike his manager, who refused to concede the title race was over, Vidic thinks United should set new goals.

"We have to focus now to get in the top three, top four. We have to be positive."

With United also lying six points off the top four Vidic admitted even qualifying for the Champions League would not be straightforward.

He said: "It's not going to be easy but we have to now fight for different things.

"We have to focus on the (Capital One) Cup and the Champions League.

"Hopefully we can play better football and with a bit of luck I think we can achieve that."

Vidic felt his dismissal by referee Phil Dowd was harsh.

"I think it was a bit harsh because I went for the ball," he said.

"Hazard is a sharp player, he just pushed the ball."