Vidic wont give up on title 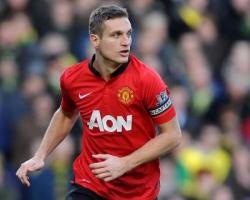 United head to Chelsea on Sunday nine points adrift of their hosts, who themselves have only briefly headed the table this season.

Most pundits have written the Red Devils off, and those who have not accept anything other than victory at Stamford Bridge would effectively kill their chances.

A veteran of five championship-winning campaigns, Vidic knows the qualities required to come out on top at the end of an arduous domestic campaign.

And with so many big matches ahead, the 32-year-old is not willing to write United off just yet.

"The next six or seven matches will determine how we are going to do. The results we get will tell us what our aim will be this season.

"Chelsea away is a tough match. If we win it, we are six points behind them. That would still give us a chance to think about winning the title.

"I know it doesn't sound right at the moment. But with a few wins in a row we still can challenge for the title.

"I am not saying to win it. But if we challenge, from there we can see what our position is."

In only two full seasons during Vidic's time in England have United failed to win the league.

As the margin of failure to Chelsea and Manchester City in those campaigns were a single point and goal difference respectively, the sharp lurches in form experienced during David Moyes' debut term in charge have come as something of a shock.

So much so that Vidic is not prepared to look at a league table which, heading into the weekend's fixtures, had his team slumped in seventh, good enough only for the final Europa League spot - and not even that if one of the two cup qualifiers are from lower down the standings.

"I don't look at the table now," said Vidic.

"I am waiting to win a few games in a row, then I will look at the table again.

"It is important not to have this sequence of good results, then bad ones.

"We need consistency. We are not necessarily looking for great performances, we just need a few wins in a row to know everything is going the right way."

There have been periods when United have looked quite good - the impressive opening day win at Swansea, a 12-match unbeaten run spanning two months and a run of six wins on the trot that ended on New Year's Day.

Interspersed with that, though, has been some woeful form.

That has included one win in five after that initial Swansea success, including defeats to Liverpool and Manchester City, and back-to-back home losses inflicted by Everton and Newcastle, neither of whom had any recent history of winning at Old Trafford.

And then there were the three losses in a row to usher in 2014, costing United a place in the FA Cup and giving them a deficit to overhaul in next week's Capital One Cup semi-final against Sunderland.

"We have had some bad luck this year," said Vidic.

"We had tough matches at the beginning of the season, including a few derby games.

"We had just changed the manager, so there was pressure on the new one. There were expectations. Everything was looking forward.

"If we had a better schedule and we had won the first few matches, maybe everything would have been different.

"But we had some draws. We lost against Liverpool away. We haven't had luck with injuries. The season was stop and go all the time. It has looked like we have never started playing.

"I am not trying to find excuses. We have a big squad with a lot of good players. I just hope a better time is coming for us."