We must build on cup success says Martial 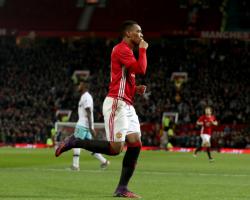 Jose Mourinho's arrival undoubtedly brought an injection of excitement to Old Trafford, but there have been teething problems as United attempt to return to the top of the English game

The 20-time league champions entered the weekend 11 points off the summit and eight points off a Champions League berth following their worst start to a season in the Premier League era.

United have, though, fared better in the cup competitions and progressed to the EFL Cup semi-finals with a 4-1 defeat of West Ham on Wednesday.

Mourinho's side clicked on a night when Martial netted a brace and the forward, who has struggled to make an impact this season, hopes it can be built on at Everton on Sunday.

"Firstly, it felt great to score in the week as I've not played that regularly of late," Martial said.

Hopefully we can take that into the game on Sunday.

"We've had a lot of draws recently and have come up against goalkeepers in amazing form.

"But we've worked really hard to improve our efficiency and effectiveness in front of goal and hopefully that will pay off."

Martial could again be unleashed from the outset at Goodison Park, having clawed his way back into Mourinho's thoughts.

The forward, who turns 21 on Monday, has struggled for game time this season, never mind getting anywhere near to replicating the fine performances of his first season in English football.

Among Martial's 17 goals in his maiden campaign at Old Trafford was the superb winner against Everton in April's FA Cup semi-final at Wembley.

The France international hopes to again prove the scourge of the Toffees, with Ronald Koeman's men out to end a poor run of one win in eight league matches.

"I think it will be tough," Martial told MUTV

"They've strengthened in the pre-season, they've improved their squad

I think it will be a good game.

"But I think if we play the way we know how to, I think we can do well there and get a good result.

"The fact that they've had a bad run of results can make them more determined to bounce back and get back on the winning trail again.

"All teams raise their game when the play against Manchester United, we know that.

"Especially going to away grounds, so it's going to be a tough encounter for us."

United will be without Wayne Rooney at Goodison Park as the captain serves a one-match ban at his boyhood club.

Marouane Fellaini, another former Everton player, and Paul Pogba return from suspension, but Luke Shaw could join Chris Smalling and Eric Bailly on the sidelines.